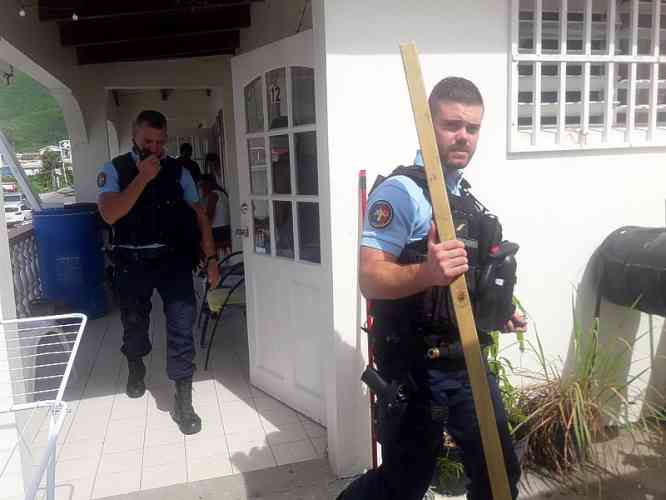 FRENCH QUARTER–A landlord in French Quarter landed himself in hot water on Monday after taking what appeared to be pieces of 2×4 wood and bolting them across the front door of an apartment occupied by his female tenant and her young child.

The tenant was said to have been asleep in the apartment, located on Coralita Road in French Quarter, when the landlord locked her inside the apartment.
The Daily Herald was unable to locate the landlord for his side of the story. However, reports indicate that the landlord has been making futile attempts to reach the tenant.
Neighbours called the gendarmes after the occupant woke up and could not exit the apartment, which only has one access door. The windows of the apartment are also grilled, so getting out through a window was not an option.
Gendarmes responded in full force to the incident and removed the pieces of wood from across the front door, allowing the mother and child to exit the apartment. The woman was then escorted to the Gendarmerie to file a report of the incident.
A group of spectators had gathered at the scene to watch what was happening. Some spectators commented on how serious the landlord’s offence was, noting that if a fire had broken out it could have had fatal consequences, as the tenant and her young child had no way of exiting the apartment.
Another spectator said the tenant should have broken the windows to get out. However, they were grilled up.