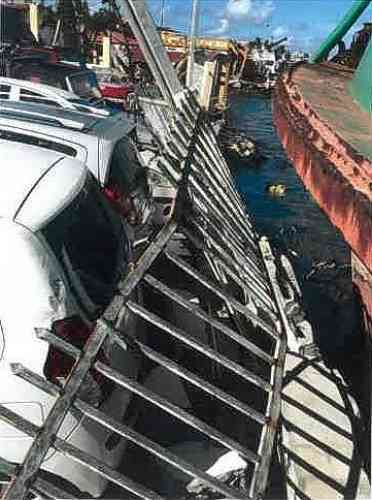 Owners can be held liable for damage caused by vessels that were anchored or docked in Simpson Bay Lagoon and ran adrift during Hurricane Irma in September 2017, the Court of First Instance has ruled on July 23, 2019.

SIMPSON BAY–In a landmark case, the Court of First Instance has established that owners can be held liable for damage caused by vessels that were anchored or docked in Simpson Bay Lagoon and ran adrift during Hurricane Irma in September 2017.

On July 23, the Court of First Instance ruled in a case filed in April by a car rental agency in Simpson Bay against the owner of a seagoing vessel in Anguilla.

The agency has a large parking lot for its vehicles alongside Simpson Bay Lagoon, separated by a concrete wall with a metal fence on top.

On September 6, 2017, the vessel in question was moored or anchored in the lagoon in the parking lot’s proximity. By the force of the hurricane, the vessel ran adrift. It rammed the quay next to the parking lot, destroyed a large part of the wall and the fencing, and damaged a number of cars that were parked close to the quay.

The car rental agency held the ship’s owner responsible for the damage, estimated at US $71,339, but the damage was not reimbursed.

The ship’s owner, who was not insured in St. Maarten for hurricane damage, referred to Article 8:534 of the Civil Code in which it is stated that in case of “force majeure” the damage is borne by the person who has suffered it. Hurricane Irma was a case of force majeure and, therefore, the car rental must bear its own damage, the shipowner had stated.

The car rental agency, represented in these proceedings by Emmely de Haan of Berman Keuning attorneys at law and strategy consultant, disagreed. They claimed this was not a case of force majeure, because Hurricane Irma’s arrival, including its extremely high strength, was known days in advance.

The Court agreed. “In the case of Hurricane Irma, it was already known around September 1-2, 2017, that she was developing extreme storm strength and was heading for St. Maarten. Therefore, many shipowners brought their vessels to safety near other islands, the aircrafts of national airline Winair were transferred to an airport abroad and many people left St. Maarten several days before,” the judge stated in the verdict.

The Court said that plaintiff had rightly argued that it was “incomprehensible” why the vessel had not been taken to a port of shelter, all the more because the vessel in question had insurance coverage in the port of Anguilla.

Despite the ruling in the car rental’s favour, the damage has not yet been settled, because the Court considered the damage insufficiently substantiated. The car rental was ordered to specify the damage per car and provide photographs. The Court also wanted to be informed about the age of the damaged vehicles, their mileage and any previous repairs.

Berman Keuning law office, which specialises in maritime law, has represented clients in about a dozen similar cases, most of which were settled.

In total, Berman Keuning has “cleared” 140 boats from marinas by sending notifications and publications in The Daily Herald and proposals for a settlement, before going to Court.

“For our office all procedures have now been closed. Last month, we have settled the last case. This case is the only one that is still open, but this only concerns the assessment of the damage,” De Haan explained.