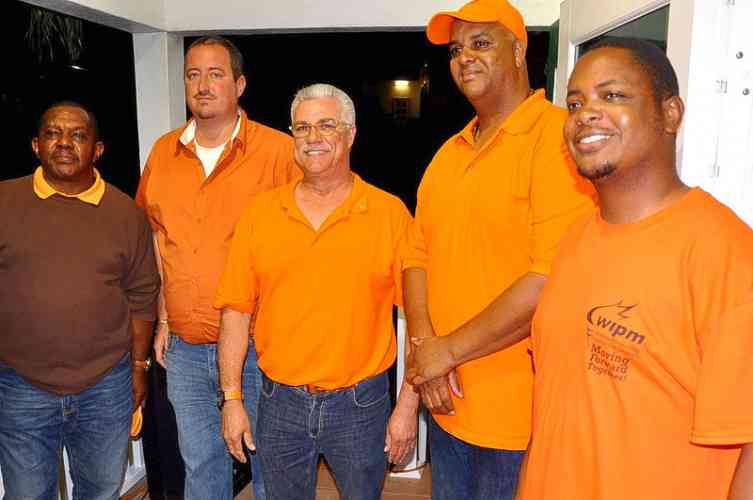 The preliminary voting results announced shortly after 11:00pm on Wednesday showed that the Saba Labor Party (SLP) and the blank slate of Dave Levenstone were unable to pull a seat with respectively 123 votes and 80 votes.

Dave Levenstone, who ran with a blank slate, got 80 votes in total.

“I told you there would be surprises when we presented our strong team,” said WIPM party leader Rolando Wilson in his short victory speech on the balcony of the Government Administration Building in front of a few hundred people. “What a day! A clean sweep! Thank you voters,”

Main and Central Bureau Chairman Island Governor Jonathan Johnson, who announced the preliminary results, thanked the voters for the “maturity and civility” they had displayed.

The definite voting results will be ascertained during a meeting of the Main Voting Bureau this Friday, March 20. On Thursday March 28, the new Island Council for the period 2019-2023 will be installed, and the two Commissioners appointed.

The two voting stations, one at the Fire Station in The Bottom and one at Eugenius Johnson Community Centre in Windwardside, opened on time at 7:30am. The first voters were already waiting anxiously to get inside.

Monique Wilson (SLP) was the first number one candidate to cast her vote for the Island Council and the Electoral College shortly after the opening of the voting station in The Bottom. Right after, Rolando Wilson, who heads the WIPM slate, came in to vote at the same voting station, together with his wife Diane.

A little after 11:00am, Dave Levenstone, the sole candidate on the blank slate, appeared at the voting station in The Bottom to cast his votes.

WIPM’s biggest vote-getter, Bruce Zagers, with his wife Tracy at his side, cast his votes at the voting station in Windwardside during lunch time.

Just before that, at 12:30pm, the first figures of the numbers of votes cast at the two voting stations came in: 399 votes for the Island Council and 267 for the Electoral College.

The atmosphere at the voting stations was pleasant. People behaved in an orderly manner and no incidents were reported.

Central and Main Voting Bureau head Island Governor Johnson visited both voting stations throughout the day, and kept in touch with the chairpersons of the voting bureaus and the Census Office which provided the logistical background support.

Two observers were present from International Foundation for Electoral Systems (IFES), a non-profit, non-partisan electoral assistance organisation that has worked with more than 145 countries in the past 30 years.

During the 2015 Island Council elections, 952 valid votes were cast, of which 545 were for WIPM and 407 for SLP. WIPM won three seats in the Island Council and SLP two. Bruce Zagers (WIPM) was the biggest vote-getter in 2015 with 187 votes, followed by Chris Johnson (WIPM) with 145 votes and Monique Wilson with 121 votes. At that time, Bruce Zagers ran number three on the WIPM slate and Chris Johnson number two, while Monique Wilson was number 6 on the SLP slate.

Rolando Wilson, Carl Buncamper and Eviton Heyliger took up seats in the Island Council in 2015 on behalf of WIPM. Monique Wilson and number one on the SLP slate Ishmael Levenstone became Island Council Members for SLP. Chris Johnson and Bruce Zagers became Commissioners.

When Chris Johnson left Saba to become the Dutch Representative in Philipsburg, St. Maarten, Rolando Wilson was appointed Commissioner in May 2016 and Vito Charles took his seat in the Island Council.