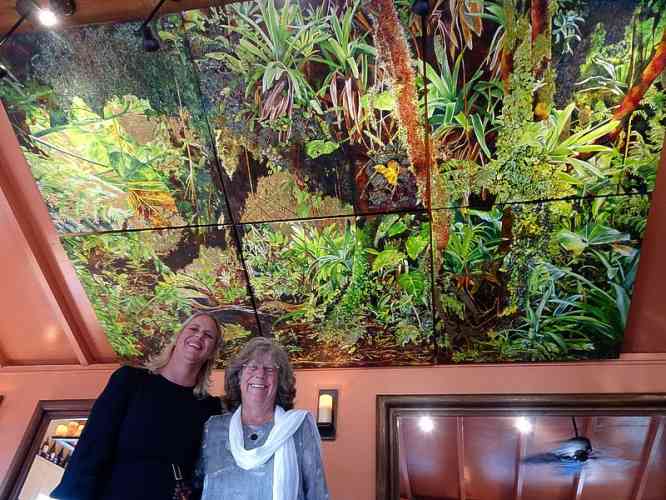 SABA–It was a proud moment when the large ceiling painting of Heleen Cornet was unveiled at Tropics Café and restaurant in Windwardside on Saturday, March 30. The art work of two by three meters consists of six panels which together depict a scene from Elfin Forest on Mount Scenery.

Cornet’s daughter Johanna Schutten of Tropics and Juliana’s Hotel explained that about a year-and-a-half ago she and her husband Wim Schutten saw a photo that photographer Kai Wulf of Saba Conservation Foundation took of Elfin Forest.

“We liked the photo very much,” she said. “Kai showed us his photo and we all loved it. Heleen said she wanted to make a painting of it, and we said why not paint it for our restaurant?” said Wim Schutten in his short address to invited guests at Saturday’s well-attended reception.

Cornet said many years ago at home she had a large painting on the ceiling created by a friend. “That always stuck with me, so when Johanna and Wim asked me, I immediately said ’Yes.’ It was a lot of work, and it took me almost half a year, but I loved doing it. It is my largest work ever,” she said.

Cornet worked on the six paintings, each measuring 48 by 48 inches, for about half a year. She used a new technique with bronze and gold leafing, which gives the artwork a special dimension.

Guests attending Saturday’s unveiling were amazed by the beauty of Cornet’s largest work.

The establishment has been painted and new tiles and new table tops were put in. Pillows with Cornet’s artwork are also decorating the café/restaurant and the area around the swimming pool. The revamping is part of the overall expansion and renovation project of Juliana’s Hotel.