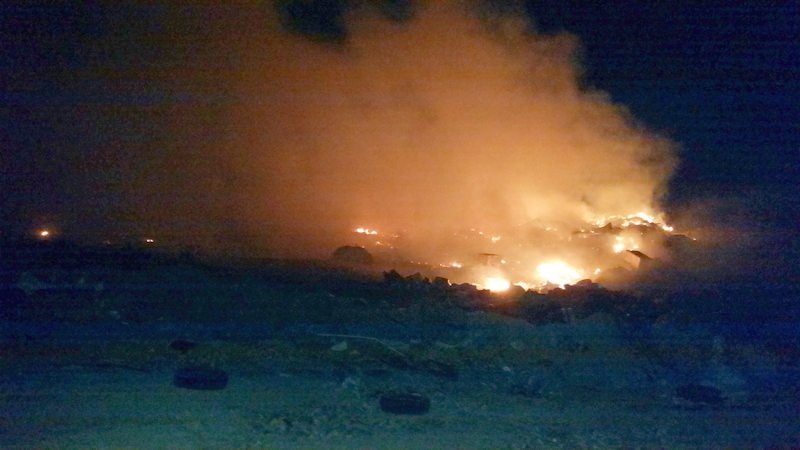 The entire dump on St. Eustatius ablaze on Wednesday night.

ST. EUSTATIUS–The majority of the sanitary dump on St. Eustatius erupted into a large blaze on Wednesday evening. Unlike several weeks before when one single area of the dump was burning, the dump was completely engulfed in flames.

The St. Eustatius Fire Department is monitoring the fire with the safety of the island’s population and fire fighters in mind.

Dr. Gerwin Schobbe of the Department of Public Health had no information about harmful gases that may or may not have been produced or released during the dump fire.

“We have monitored the health situation on the island via Queen Beatrix Medical Centre,” he said.

Schobbe said medical personnel did not report any increase of pulmonary problems or any other suspicious symptoms that could be related to smoke inhalations occurring during or after the fire on the dump, or during previous fires.

Schobbe confirmed that the St. Eustatius Utility Company STUCO is having problems with the water production. STUCO is instructed by the Health Department to advise the general public to boil the water until they are sure that the measures they are taking have resolved the problem,” as certain bacteria are in the water lines. According to STUCO the bacteria are not harmful to people, but the company advised customers to boil water before consumption.

“I advise you to query STUCO about the measures that they are talking about, since we cannot talk for them. The Public Health Department is monitoring the situation and will instruct STUCO accordingly,” said Dr. Schobbe.

STUCO personnel said the treatment of the water situation is nearing completion and they are continuing to diligently rectify the situation.