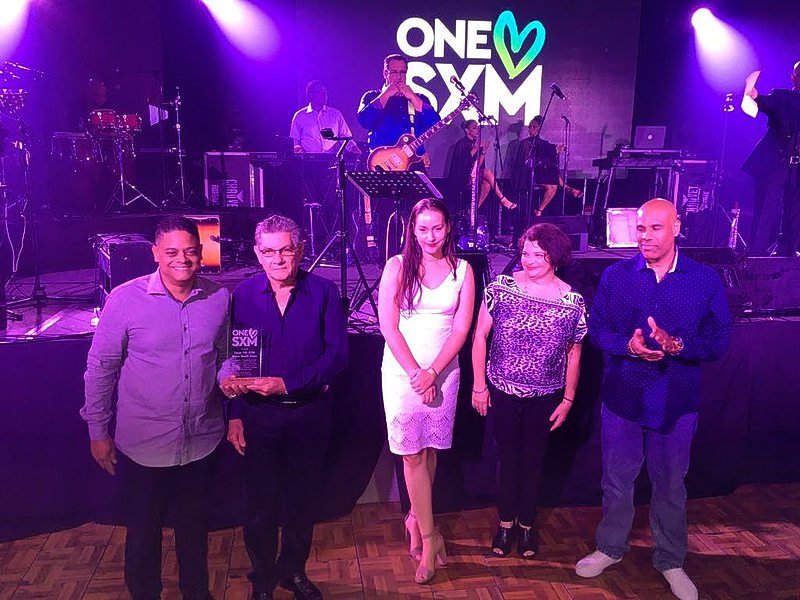 Members of the Laser 101 storm watch team with Prime Minister of Curaçao Eugene Rhuggenaath this past weekend.

WILLEMSTAD/PHILIPSBURG–The members of the Laser 101 Storm Watch Team went to Curaçao over the weekend on invitation to attend the reunion and final concert of The Band Survival. The Band Survival, a Curaçao that was very popular in the ’80s and ’90s, took the stage for the final time on October 21 at the Curaçao World Trade Centre and performed for some 600-plus guests.

Laser 101 was able to get back on-air shortly after Hurricane Irma thanks to some back-up equipment and remained on air almost 24 hours a day for an entire week to provide its listeners with important information.

“This team worked around the clock, with complete disregard of their personal circumstances, before, during and after the passing of monster Hurricane Irma,” said founding band member Kevin Carty.

The concert was a trip down memory lane for many, and they sang along and danced the night away to some of the most famous hits of the last two decades.

The Band Survival took a moment during their performance to highlight the impact Hurricane Irma had on St. Maarten and its people. They explained to the concert-goers that during the most difficult time the island had experienced in some 20-plus years there was limited to no form of communication directly after the storm.

The Storm Watch Team also thanked the people of Curaçao for stepping in almost immediately after the passing of Hurricane Irma to organise benefit events and donation drives for the people of St. Maarten.