Home Local News Last of the Goldfinger robbers sentenced to 15 years in prison |... 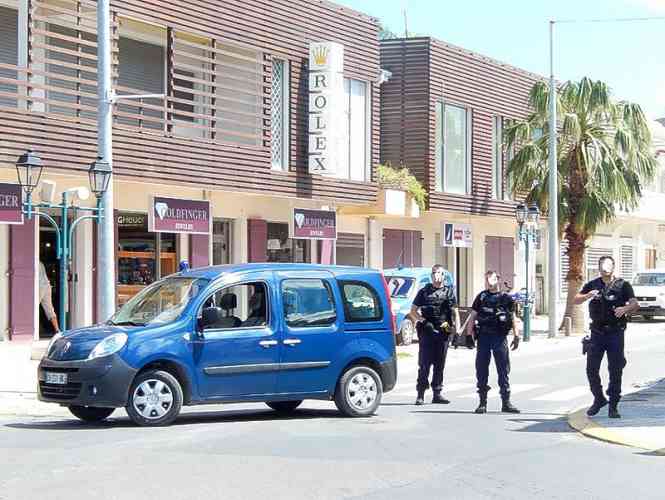 Gendarmes on the scene of the October 22, 2014, robbery of the Goldfinger store on Rue de la République. (Le Pélican photo)

MARIGOT–The Court in Guadeloupe on Friday sentenced Juan Carlos Sanchez Diaz from the Dominican Republic to fifteen years in prison for his part in the October 22, 2014, armed robbery of the Goldfinger jewellery store on Rue de la République, Marigot.

Diaz (48), the third man involved in the robbery, managed to escape arrest by Gendarmes and fled to the Dominican Republic with a fake Venezuelan passport in the name of Luis Enrique Hidalgo Contreras. He was finally arrested there in 2017 prior to his extradition on November 30, 2018.

Diaz was charged with aggravated kidnapping, armed robbery and criminal conspiracy. The Prosecutor had demanded an 18-year prison sentence.

In an effort to obtain a more lenient sentence, his lawyer argued that he was not involved in the taking of a hostage, but the court found that he had assisted in the kidnapping of a hostage and had threatened employees of the store with a gun.

The ringleader of the robbery Canquis Pestana was condemned in October 2018 to 18 years in prison for attempted homicide of a Gendarme, taking a hostage to facilitate escape, robbery, and damage to public property. The prosecutor had requested 22 years.

The second robber, Monsalve, was sentenced to 12 years in prison for being an accomplice in the robbery. The prosecutor demanded 16 years.

A local St. Martiner was also found guilty by association for helping find accommodation and transport for the robbers. He was sentenced to three years in prison, two suspended. However, because he had already served one year in prison, he was freed.

Diaz was in fact the organiser of the robbery, but had not fired any shots. Pestana and Monsalve were heard as witnesses in the trial, but had difficulty “remembering” the events of that day.

The robbery on the morning of October 22, 2014, stood out from normal quick smash-grab-and-escape robberies in that Gendarmes reacted more quickly than the criminals anticipated thanks to a quick-thinking employee pressing a silent alarm as showcases were smashed.

It was also unusual that the suspects were dressed as businessmen without covering their faces. With their appearance not raising suspicion, they were let in through the automatic doors of the store.

Gendarmes were credited for their bravery under fire when they confronted the robbers inside the store. Moments later a dramatic shootout ensued in the streets, witnessed by members of the public, as the robbers attempted to escape with their loot. Two Gendarmes outside the store were injured by flying glass as a second Gendarme patrol converged on the scene.

The three robbers took with them the store manager as hostage, holding him at gunpoint and firing shots at the chasing Gendarmes as they made their escape with the bag of watches on foot in the direction of West Indies Mall and Fort Louis Yacht Club. They decided to let the hostage go unharmed, but then assaulted a driver sitting in his car, forcing him out of the vehicle before driving it towards Galisbay.

However, a few hundred metres beyond the Yacht Club the escapees were met by another Gendarme vehicle blocking their path. At some point Monsalve was shot in the leg and dropped the bag of watches. Two were arrested on the spot and the third robber escaped. In total 14 shots were fired in the shootout with Gendarmes; nine by the robbers and five by the Gendarmes.

No members of the public were injured in the crossfire.