Home Local News Laura Dekker: ‘Patagonia, Antarctica, are still at the top of my... 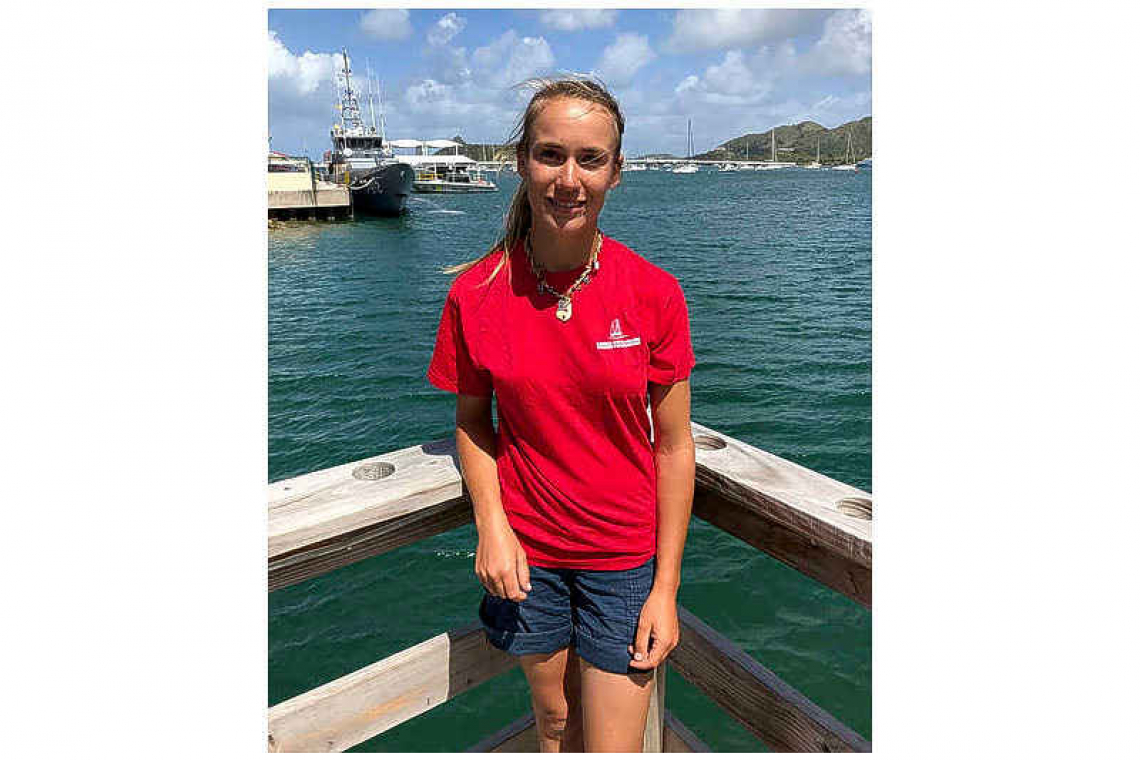 SIMPSON BAY—A relaxed Laura Dekker sits out in the shade of the Sint Maarten Yacht Club outer deck waiting for this interview, not attracting any attention from diners.

“Everything has changed so much since I was last here,” she says, staring in amazement at the Causeway Bridge.

How time flies. It’s the first time she’s been back since sailing single-handedly around the world, causing a sensation at just 16-years-old, and becoming the youngest person to do so. She had announced her plan to sail around the world in 2009, overcoming resistance from the Dutch courts that deemed she was too young while under the shared custody of both parents.

Famously, she was 14 when the court had chained up a smaller Guppy she had in the Netherlands (not the one she eventually did the circumnavigation on) which prompted her to defy the courts and flee to St. Maarten without her parents knowing. The intention was to buy a boat here. But a week later she was found and ordered back to the Netherlands.

The Dutch court eventually ended the custody arrangement in July 2010 and she finally set off for the solo circumnavigation in her 40ft two-masted Jeanneau Gin Fizz ketch Guppy on August 21, 2010, arriving 518 days later in St. Maarten on January 21, 2012, to much fanfare and publicity.

This time she slipped quietly into St. Maarten for a stop-over on February 25, now on a bigger boat, a Robert Perry-designed Scorpio 72 ketch, also called Guppy. She obtained her Yacht Master Ocean certificate in February 20, 2015 that has enabled her to skipper the new boat.

The original Guppy, Laura reveals, ended up shipwrecked in the Cook Islands after it was lent to another organisation that does sail training, a sad end for such a worthy boat.

Her partner, two and-a-half-year-old son and another crew member are teaching youngsters sailing as part of her Laura Dekker World Sailing Foundation programme. They take eight teenagers at a time, from ages 12 to 16, most of who fly in to join the boat at different stages. The current group is all from the Netherlands and Germany.

Helicopter shot of Laura Dekker on Guppy approaching St. Maarten at the end of her solo circumnavigation in 2012. (Jean Jarreau photo)

Four students are doing the entire trip, another couple did the first leg, and so on. The shortest time on board is five weeks and the longest six months, but the trainees can choose how much time they want to spend on board.

This is an Atlantic round trip that started in the Netherlands in November 2020, sailing to the Canary Islands and Cape Verde before going to Barbados, St. Vincent and the Grenadines, then to Martinique and St. Maarten. Because of COVID-19 and quarantines some of the island visits have been cancelled.

“I must have changed my plans 20 times,” she sighs. The plan next is to go to the Turks and Caicos, and the Azores before returning to Europe.

“I let the trainees do everything on the boat; cook, sail, navigate. We (crew) are just there to make sure everything goes well,” she says of the programme. “I’m doing this because I learned so much during my solo circumnavigation. Being a teenager, that’s the age when you are trying to find out who you are and what you’re are going to do in life, and it’s the time you are being formed.

“When you are at home as a teenager, you feel like everyone is telling you what to do, your parents, friends, and then the influences and distractions of social media and the internet, computers and phones, that it’s hard to know what you want to do,” she explains. “I really think it’s nice to be away from that for a little while so they can find themselves.”

Laura admits the reception she received in St. Maarten after her voyage was overwhelming, just after completing an exhausting 41-day leg.  How long did it take to decompress and process her achievement?

“Years,” she says with a laugh. “Afterwards I sailed to New Zealand made that my home base. I lived on Guppy for another seven to eight years. I worked in New Zealand and did a lot of yacht deliveries. I also gave presentations in schools. And in my head, I was already thinking about teaching kids sailing.”

In the intervening years, she also wrote a book “One Girl, One Dream” about her round the world experience.

She credits her parents for the support they gave her for the circumnavigation.

“They were not happy about me sailing around the world but didn’t pull me back either, knowing how determined I was to do it. They have always encouraged me to work hard, go for it and fight for it. They taught me how to achieve things, how to be myself and I’m just so grateful to them for that. They realised that they could help me by teaching me to do the trip in a safe way.”

Laura is proof that it is possible to realise your dreams, so it’s understandable she’s critical of parents or teachers who tell their children its unrealistic or unfeasible to become an astronaut or a world champion sportsman.

“That’s killing the dream and I really don’t like that because the child is not going to fight for that dream.”

From a very young age, Laura followed the traditional Optimist route, then to a Mirror wooden dinghy, before progressing to keel boats. At 13 she had a 7-metre seaworthy boat, she knew how to navigate, and had money saved. Most of the time she was sailing alone as her friends were not as fanatical as she was.

“I felt ready to do it (sail around the world) but I never thought it would create such publicity and objection. The reason I did it was to explore the world and find myself. Sailing is second nature for me, I’m so comfortable with it. I’ve been through storms and calm moments, I had to fix things on my own that broke. I laugh now about how creative my repairs were then. But my Dad had prepared the boat so well and by the time I left, I knew the boat inside out.”

Is another circumnavigation on the cards, or perhaps something more competitive like the Vendée Globe?  She ponders the thought…

“I might, if the opportunity arises but I’m not actively looking for it. Something like the Golden Globe Race is more appealing to me because it’s old school and traditional. I don’t really like the modern technology. For me sailing is more about being in touch with nature. If a computer is advising you on your sail trim, for me that’s not being in touch with the boat.”

For now, Laura’s life revolves around teaching sailing, being a motivational speaker and writing. Another book might focus more on pollution and the environment, issues that will be affecting future generations.

It seems that someone so well-travelled and so young (she’s 25 now) and with so much experience, there are no more places to go. Her reply is surprising.

“I still want to go to Patagonia, Antarctica and South Georgia. It’s been on my bucket list for a long time. We will have to get the boat fixed up for that, for the cold. For me that’s a real challenge.  This warm water sailing is the easy stuff.”