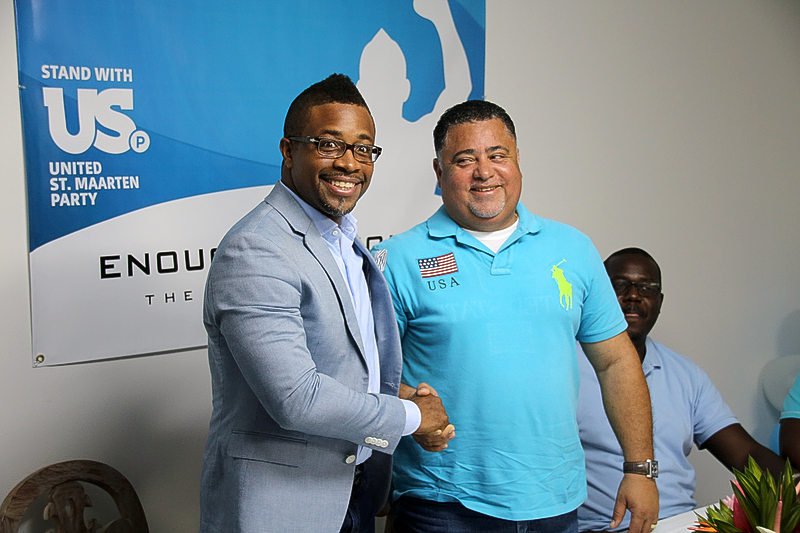 ST. PETERS–Former Member of Parliament (MP) Romain Laville was welcomed to United St. Maarten party (USP) as a full-fledged member and candidate for the September 26 elections by party leader Frans Richardson in front of party members and the board.

“I am proud to introduce MP Romain Laville to the US party, I call him MP because I know that come September, he will be elected to Parliament once again. I served with Laville during the first term of Parliament. It shows that with this party we attract the right candidates,” said Richardson while introducing Laville.

He said Laville was a strong voice in the community and was very passionate about the social wellbeing of the country’s citizens. Richardson said that under his leadership the party continued to show support for young professionals who enter the political arena.

Laville said it was indeed a special day for him, as he also celebrated his birthday.

“When I left in 2014, I made up my mind to stay away for a while. I wanted to give the new members of Parliament a chance to share their issues and beliefs. I have never been somebody who says something for just saying something,” he said.

“My four-year term in politics has been one of the most satisfying moments in my life. I had to understand the reasoning why I wanted to run for politics. I am always a believer of forging the social fabric of the people. The economy can fix itself, but the people really count.”

Laville spoke about the many motions he had brought forward in Parliament and said one of his proudest moments had been the motion dealing with the breakfast programme for primary-school pupils.

He still has legal issues, as he is charged with two cases of threats, possession of a firearm and ammunition and the matter is currently in Court.

National Detective Agency investigators arrested Laville at his home on Thursday, March 26, 2015. During a search of his home two firearms and bullets were found and immediately confiscated by detectives. After several hours of questioning Laville was released. Laville, who was an MP at the time, reportedly threatened former United People’s (UP) party MP Jules James on June 11, 2012. On November 28, he also allegedly threatened Isidore York.

Asked about his legal issues he said, “I know that everybody wants me to address the elephant in the room and talk about my legal issues. My legal team is working on it. My legal problems did not come about because I have issues with anyone, but I took a stand against injustice, the corrupt system and corrupt individuals.

“My situation today is because I took a stand and whenever one takes a stand there will always be negativity and break-backs, but as a young man my shoulders are broad and I will continue to fight for the people of St. Maarten come what may and no matter what cross is placed on my back.”

Reporters requested clarity about his statement, but Laville did not answer the question and chose to blame the media for not seeking him to find out what really happened during the incidents.

Laville also stated that the country was at a crossroad while people were hurting, with a declining middle class.

“Young people of St. Maarten find themselves entangled in the judicial system, mainly because of the social epidemic that is hitting the country and its people. Thus I feel that the only political party that can turn the situation around is the US party led by Frans Richardson.

“I call on the people of St. Maarten to stand with the US party, since enough is enough and they are the ones that will continue to fight in the best interest of the people, especially for the middle class, unemployed and the elderly,” Laville said.

During the question and answer session Laville said the lack of leadership by his former party, the UP, was one of his main reasons for leaving the party.

In the coming days, the USP will continue to release the names of candidates who will be contesting the upcoming elections in September with the party. Richardson recently announced MP Silvio Matser as another candidate contesting the elections with the USP.