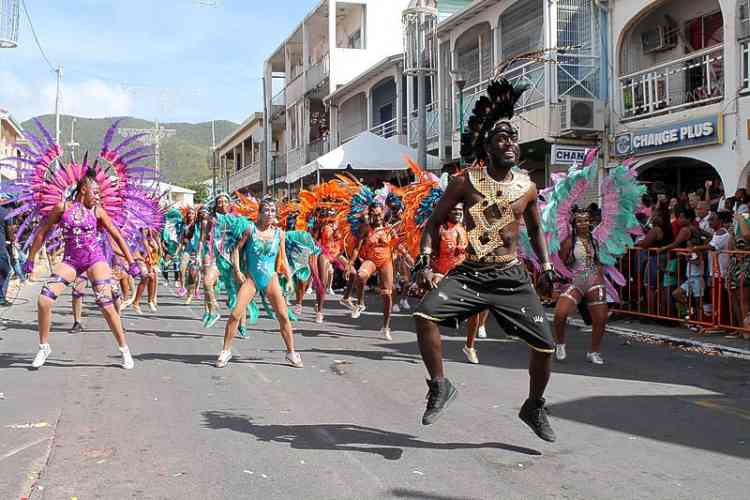 MARIGOT–An abundance of sequins, beads and feathers in glorious colours was the order of the day again on Sunday as the Adult Carnival Parade took the streets of Marigot on a sunny afternoon.

Just six of the originally-expected seven troupes took their turns to impress the crowds of spectators lining the streets with flamboyant costumes and energetic choreography routines on Rue de la République.

The procession started as usual from the Agrément roundabout and was led by a motorcade of Carnival Queens with 2019 Miss Carnival Channelia Chathuant-Richardson first in line and runners-up Nayeli Hassel, Natoinia Saunders, Tonnacia McKinnon, Zorah Richardson, Selena Valrose, and Emilia Bellot in the following cars, and the Locomotiv percussion group.

Individual Costume contestants from Saturday night were also in the procession, among them Queen of the Tribe, Golden Garden Queen, Fairy Godmother of Mas, Venise Mass Extravaganza, Marjorie Seduction and Papillon.

Spotted in costume in the early part of the procession were Festivités Carnavalesque de St. Martin (FCDSM) President Luciana Raspail, Cleo Carti, and former Territorial Councillor Jesus Anteros Santos who was with the Dominican Republic troupe.

Troupes that featured in the parade were, in order, Survivors from the Dutch side, Oxygen presented “Exotic Birds,” and Hot N Spicy was a large troupe in two sections whose theme was “Welcome to Las Vegas – Place your bets.”

Judges for the adult parade were Janice Philips, Noah Mills and Paula Gordon for the troupes, and Rudy Davis, Melissa Boasman and Fabiana Richardson. Master of Ceremonies Ricky Da Phox channelled his inner gladiator for the parade.

Results will be announced at a later date.