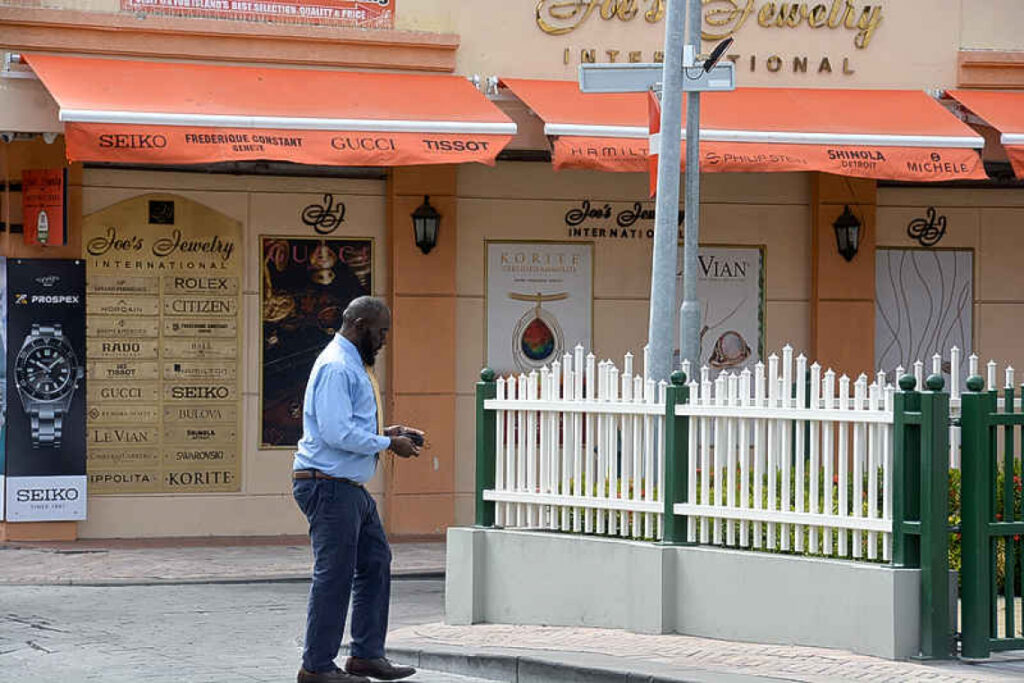 Among these were Mingo’s alleged financial irregularities and belligerent managerial style, with Brandon characterising PJIAE under his command as a “one-man show”.

Brandon categorically opposed the arguments of Mingo’s lawyer Jairo Bloem, who said his client’s firing was unlawful and had been orchestrated by a set of unnamed political figures who operate in the background to control PJIA’s affairs (See related story).

Bloem argued that the problems between Mingo and PJIAH began in December 2020, when his client received a letter requesting him to resign. The letter cited his perceived underperformance and delays in the reconstruction project as reasons.

Brandon argued that Mingo’s problems with airport personnel started from the very beginning. On January 19, 2019 – not even two weeks after Mingo assumed the position of CEO – Brandon said Mingo clashed with PJIAE chief operations officer (COO) Michel Hyman during a managing board meeting.

“The COO raised his concerns with Mingo, as well as PJIAE’s supervisory board…The various conflicts with the COO were not only set out in correspondence between the COO and Mingo, and in minutes of the meetings, but is also reflected in various letters from the COO to both the former supervisory board and the current supervisory board,” said Brandon.

She said the supervisory boards never responded to Hyman’s letters, and never stepped in to settle their issues.

Brandon argued that from Mingo’s appointment he intentionally side-lined Hyman and PJIAH from the airport’s operations.

“Mingo went his own way and bound PJIAE to various agreements without consulting with the COO, who is also a member of the managing board,” said Brandon. “Mingo acted as if he is solely in charge and did not involve the COO unless it is a ‘photo op’”.

This extended to the reconstruction financing agreements with the World Bank and European Investment Bank. “The meetings and exchange of correspondence regarding the loan through the World Bank are conducted by Mingo to the exclusion of the COO and PJIAH,” said Brandon. “Mingo brags that he personally approached the Schiphol Group and brought it in to help him run the airport.”

Brandon argued that Mingo kept PJIAH in the dark about the airport’s developments.

Although PJIAE was to have discussions with PJIAH every three months, Brandon told the Court that these were only done in “presentation form”. This resulted in the airport’s targets being formulated and changed without PJIAH’s input, she said.

Although Bloem argued that Mingo was being unduly pressured to conclude this detrimental financing agreement for the gain of a few political players, Brandon said this was not the case, arguing that PJIAH merely wanted a full investigation into what the complete proposal entailed.

Instead, Mingo wrote to the bondholders that there had been no change in the “selected direction of the European Investment Bank and World Bank funds”, Brandon told the Court. PJIAH was not copied in this letter, she said.

“The CFO’s contract expires July 2021, and no counterpart has been appointed by Mingo, so that the temporary nature of the CFO’s appointment will take on a more permanent character. Plaintiff has refused to render account to PJIAH,” she said. “Mingo did not consider it necessary to keep the shareholders informed of progress. Requests were not responded to, with the protection of the supervisory board which often took the position that it could lecture shareholders.”

Although Bloem argued that Mingo’s perceived underperformance could not be objectively concluded (see related story), Brandon argued that it was clear that Mingo “made his own positive evaluation report without the inclusion of PJIAE’s supervisory board.”

As evidence, she cited staff protests in 2020, as well as complaints from St. Maarten Airlines and Handlers Association (SAHA) to the Minister of Tourism, Economic Affairs, Transport and Telecommunication (TEATT) Ludmila de Weever about the terminal reconstruction’s slow pace.

“Reconstruction – which is of such great importance in Mingo’s opinion – has so far received little attention. In fact, the airport being used today is the same as it was when Mingo arrived…

“The reconstruction cost has been increasing by the millions, the project’s start date is constantly being postponed, [and – Ed.] projects that have already been approved are not being implemented because Mingo says these are ‘financially exorbitant’.

“The fuel farm and fixed-base operator (FBO) building are examples. Even though the FBO agreement had been signed before Hurricane Irma [in 2017] and an advance for mobilisation costs has been paid to the contractor, Mingo has done everything in his power to oppose these projects,” said Brandon.

On May 24, 2019, the former PJIAE supervisory board approved a resolution for Mingo to receive an extra monthly stipend of NAf. 4,000 for performing the function of CFO in addition to his tasks as CEO. PJIAE had no CFO at the time.

The allowance was backdated to January 7, 2019, or the day when Mingo started working for PJIAE. PJIAH did not approve this stipend.

“Although Mingo argues that the additional compensation and housing allowance cannot be classified as ‘salary’, it is clear that he says this only to justify a change in ‘salary’ which is not in accordance with the company’s articles of incorporation,” Brandon said. “PJIAH was completely ignorant of this, while the articles of incorporation state that salary conditions must be determined by PJIAH.”

In a letter to PJIAH on December 8, 2020, Mingo spoke of PJIAE’s precarious financial position, which is exacerbated by high personnel costs.

Brandon argued that in this context it is “incomprehensible” how Mingo concluded contracts with external consultants for “exorbitant compensation packages and fringe benefits.”

“All while PJIAE employees were required to surrender their holiday allowances and year-end bonuses and settle for reduced hours. The consultants’ agreements quickly show that the company’s funds are being spent indiscriminately on so-called ‘experts’, while the current situation at the airport requires different investments than, for example, the employment of an Environmental and Social Specialist.

“The reconstruction project team is made up by all kinds of ‘top heavy’ experts, but no substantial progress or improvement has been noticed at the airport since Mingo’s arrival,” said Brandon.

In contrast to Bloem’s arguments, Brandon said there has been ample reason to dismiss Mingo, with his underperformance, financial mismanagement and arrogant attitude having been issues long before the December 2020 letter.

Brandon argued that Mingo has been “playing politics” with the affair, not PJIAH.

“The plaintiff [Mingo] is lobbying the Netherlands and the Royal Schiphol Group to threaten St. Maarten with the withdrawal of funds already given. This is an evil action by someone who claims to have the best interests for the airport and St. Maarten as a whole.

“The media attention was not sought by PJIAH but by plaintiff, who actually uses the media in his hunt to remain employed,” said Brandon.

According to Article 8 of the articles of incorporation, PJIAH can summarily dismiss a managing director in a shareholders meeting, but only if the director has been given an opportunity to defend themselves beforehand.

Bloem argued that the dismissal was unlawful because Mingo had not been heard (see related story).

However, Brandon found the opposite proven, arguing that Mingo put forward his defence to the accusations in his letter to PJIAH on December 8, 2020. She also said Mingo confirmed in an e-mail on December 18, 2020, that he had been heard and was willing to negotiate a severance package.

Mingo seemingly changed his mind about leaving, and issued a statement in late December 2020 that he was not stepping down from the position. Instead, he said that he was committed to completing the reconstruction project.

“PJIAH suspects that Mingo’s change of heart happened when he was explained that the contract did not stipulate payment up to the contract’s end [of December 2024], but only to compensation for a period of one year,” said Brandon.

In this light, Brandon considered Bloem’s argument that Mingo did not know what he was to be heard about in the April 7 shareholders meeting as ridiculous. “Mingo certainly knew what he would be heard about, as he had already been heard before, and was being offered a final opportunity to defend himself. The right to be heard has been met,” she said.

Brandon argued that, in fact, it was Mingo who had been making it impossible to be heard (see related story).

“Mingo seemed to assume that if he avoids the hearing, the shareholders cannot dismiss him because, in his opinion, he has not been given the opportunity to defend himself against the allegations…

“The plaintiff, with the help of PJIAE’s supervisory board, tried to make it impossible for PJIAE to convene a meeting [in March 2021] to hear plaintiff and send him home. Because PJIAH is dependent on the agenda’s publication, Mingo played with the summons deadline by stating that he needed clarification before he could issue it, forgetting that he is not a shareholder and, therefore, the summons is not addressed to him,” said Brandon.

Brandon thus considered the dismissal lawful, and ordered the Court to dismiss Mingo’s request to be reinstated to his position.

If the Court rules that the dismissal was unlawful, Brandon argued that the Court should still not reinstate Mingo because there has been a substantial “breach of trust” between the two parties, which would make a continued working relationship impossible.

“Both parties agree on one thing, and that is that the relationship is severely and completely disrupted, and there is no hope of positive change or recovery.

“What to do now in the event of such a breach of trust? The only logical solution is to shake hands and end the relationship amicably,” said Brandon.

The judge will render a verdict in this case today, Wednesday.