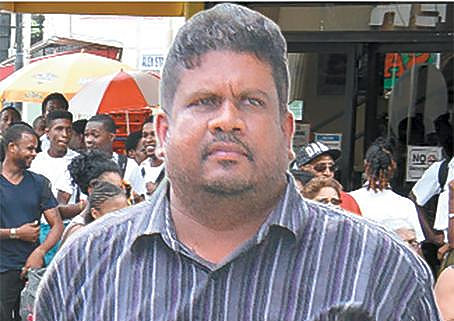 PRINCES TOWN, Trinidad–Reeshie Surajbally, who was allegedly caught with two naked intoxicated girls in his van, was jeered and taunted by a large crowd when he appeared in the Princes Town Magistrates’ Court yesterday.

Surajbally, through his lawyer, later expressed fear for his safety if he were to be taken to prison when he appeared before Senior Magistrate Rajendra Rambachan on six charges, including two counts each of kidnapping, sexual indecency and serving alcohol to a child, and was denied bail.

As a handcuffed Surajbally was being escorted by police officers to and from the courthouse, scores of onlookers, including schoolchildren, gathered opposite the court shouting: “Rapist” and “Jail him for life” among other derogatory remarks.

However, the 39-year-old Princes Town father of two remained stone-faced as he was taken to the First Court, where Rambachan read the six charges to him.

But apart from the relatives of the accused and the victims, members of the public, including reporters, were ordered out of the court because the matters were held in-camera.

The charges arose out of an incident on Monday, May 16, where it is alleged police found two sisters – ages nine and 14 – in a vehicle parked along Cedar Hill Estate, Barrackpore.

It is alleged that Surajbally, a technician, took the girls there after he allegedly kidnapped them from High Street, Princes Town. He was charged by PC Alcala of the Child Protection Unit.

Surajbally, who is married, was not called upon to plead to the charges because they were indictable offences. Two of the charges, the sex offence and serving alcohol to a minor, were laid under the Children’s Act.

Given the widespread publicity the matter has received, Surajbally’s attorney, Yohan Pancham, said the accused was fearful for his safety in prison and requested he be kept isolated from the other prisoners.

Sources said Surajbally was also kept separately from the other prisoners in court yesterday.

The prosecutors – Sergeant Roger Richardson and Sergeant Shazeed Mohammed – objected to bail on three grounds. Richardson said they were yet to trace the accused to determine if he had pending matters or previous convictions.

He said they were also of the view that if granted bail, Surajbally would interfere with witnesses and obstruct the course of justice.

Citing Section 2(B) of the Bail Act, Richardson said Surajbally should be kept in custody for his own protection.

Addressing Pancham’s request for the accused to be isolated in prison, the magistrate said the court did not have control over accommodation in the prison. The accused was then remanded into custody for tracing and the matter adjourned to next week Wednesday. ~ Trinidad and Tobago Guardian ~