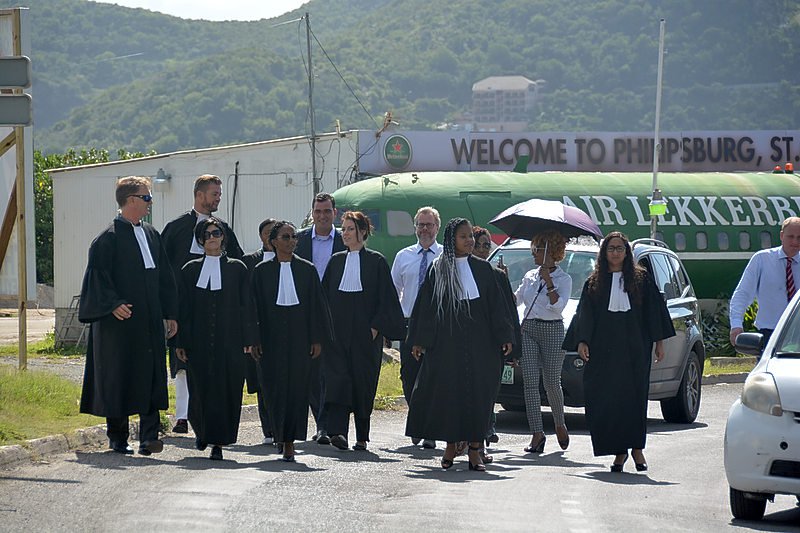 PHILIPSBURG–On-call lawyers staged a protest march to the Ministry of Justice and the new Government Administration Building on Friday morning in calling for attention to their pledge to obtain better and timely payment for their services as pro-bono lawyers for government-assigned clients.

After the march a delegation of the strikers had a meeting with Prime Minister William Marlin, Minister of Justice Edson Kirindongo, and Director of the Minister’s Cabinet Stanley Kwidama. As this meeting did not lead to any tangible results, the lawyers’ strike is to continue unabated, spokesman for the attorneys Cor Merx said.

Pro-bono lawyers are on strike since September 7 to obtain timely payment for their government services and an increase of fees which have not been indexed since 1993.

The strike is an initiative of attorney-at-law Geert Hatzmann. Since then some ten lawyers have gone on strike. The strike has the full support of St. Maarten Bar Association and is coordinated by the Association’s criminal division. Several civil lawyers joined their striking colleagues in the march in a show of solidarity.

In total, 18 lawyers marched to the Ministry of Justice, but did not find the minister there. As he reportedly would have been at the official opening ceremony of the new Government Administration Building, the strikers decided to relocate to Pond Island.

At one point National Alliance (NA) candidate Jimmy Challenger approached the lawyers to try to convince them to step aside and let the ceremony proceed, but they still did not move. When Prime Minister Marlin arrived, he spoke briefly with the lawyers and promised to meet with them immediately after the ceremony. They agreed and left the stage and the opening ceremony was then held.

In his remarks during the opening of the building Finance Minister Richard Gibson, who alluded to the attorneys’ actions as “a little disruption,” addressed the issue. “In my 40 years that I have been practicing law, I knew the routes. I knew the regulations, I knew the law. In fact, I always told people that if anyone owed you, come to me and I’ll collect it for you. I didn’t come to openings of buildings and stand up and disrupt. No, I knew the law and if I wanted to meet the Minister of Justice, I wouldn’t come to an opening ceremony to meet a Minister of Justice; I would call his office and make an appointment.

“I would ask his secretary, ‘Please, I have something I would like to discuss with the Minister of Justice or the Prime Minister or the Minister of Finance,’ but on this glorious day, that display is one I think we should not appreciate given the fact that this building symbolises a building that has caused us a lot of pain. Finally we’ve cut through what I call the Gordian knot and solved the problems associated with it, so we all can today walk through and say we are starting a new approach. We have built the foundation, let’s build as opposed to destroy and spend and spend without an end,” Gibson said.

Towards the end of his speech Marlin said that the lawyers’ issue had been an ongoing one. Marlin said he agreed to let the lawyers have what would be the first meeting with the Prime Minister in the new Government Administration Building after the ceremony.

“The Prime Minister saved the day in promising to have a meeting with us,” Merx commented. After the ceremony, a delegation of the striking lawyers, comprising Shaira Bommel, Sjamira Roseburg, Dagmar Daal, Hatzmann, and Merx met with the Prime Minister and the Minister of Justice.

“It was a pleasant meeting, in which we received an extensive explanation about budgets and budgeting, but we only have one question: we want our money, and that’s the end of it,” Merx said.

“Apparently, the Minister of Justice spent the budgeted amounts on all kinds of things, such as a canine brigade and insurance policies for police officers, but at the end of the line lawyers also need to get paid. Government has an obligation to these lawyers, and needs to fulfil it,” he said.

Minister Kirindongo said during the meeting that he has submitted a proposal to the Council of Ministers to supplement the budget of the Ministry of Justice with surpluses from the other Ministry’s budgets. As no meeting of the Council of Ministers is to be held prior to Thursday, September 29, the lawyers’ strike is to continue to at least that date, Merx said.

“It supposedly is all going to be alright, but we do not believe that. We want to see our money, or a real commitment. We will continue our strike until we receive a decisive answer. We are determined to get to the bottom of this,” said Merx.

The Chairman of the Bar Association’s Criminal Division said he was displeased with Minister Gibson’s comments.

“He, a lawyer for 40 years? He means an agent (zaakwaarnemer), who is allowed to put on a gown. Am I a woman when I walk around in women’s clothes? It was an unpleasant remark, which made no sense.”