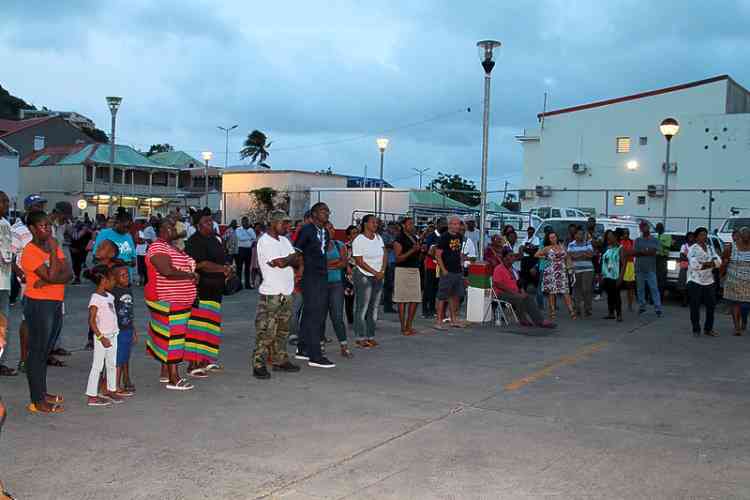 A section of the crowd in the car park during the early part of the evening. (Photo Robert Luckock)

MARIGOT–Despite an attendance of some 200 to 300 persons at the Lazy Bay car park on Tuesday evening to hear concerns over the revised natural risk prevention plan (PPRN) expressed by a citizen’s group, there was no real conclusion or plan of action announced, not immediately anyway, following the three-hour meeting according to one of the speakers who was asked later.

Following the call for a “mobilisation” of the population last Friday by the citizens’ group for the Tuesday meeting, some of the same speakers, who called the press conference to alert the population were there, namely: Cédrick André, Luc Wellington, Ange Matime, Jules Charville, Victor Paines, Agnes Alexander, Danica Liburd, Diana Hodge, and more. At the press conference the PPRN was firmly rejected by the citizens’ group.

The central message the speakers wanted to get across was that it is up to the population to decide what they want to do, not the speakers who were there only to explain the PPRN as it has been presented to date, and to alert the population to the motives of the French State which according to them are not in the best interests of St. Martiners, in terms of losing land and property.

“The State wants to take our land, our houses, and divide us,” declared Cédric Andre.

Much of the same ground was covered again that was expressed in the four district meetings on the PPRN, and it appeared the speakers were giving a summary on the implications of the plan for those who did not attend those public meetings.

One speaker pointed out that the PPRN was all about water levels and flooding risk, but not about the force of the wind. “The recommendation is not to have any accommodation or anything on the ground floor level, but on an upper floor,” said one speaker. “That puts you even closer to the roof and the first thing hurricane wind does is blow your roof off. It doesn’t make sense. In all the hurricanes of the past 50 years, we have always been able to adapt and build back. Why have these drastic measures now?”

Another speaker criticized the Collectivité’s glacial pace of work in giving people title to their land in Sandy Ground, calling it insult to injury, faced with the threat of “indirect” expropriation which many people believe is the intention of the State.

“It’s time to wake up and react now, before we are doomed,” said another speaker. “We must put aside our differences and come together to save St. Martin for our children and our grandchildren’s future.”

The PPRN public enquiry continues until December with the population still having the possibility to make proposals in writing. It remains to be seen what course of action will be decided on, following the Lazy Bay meeting.