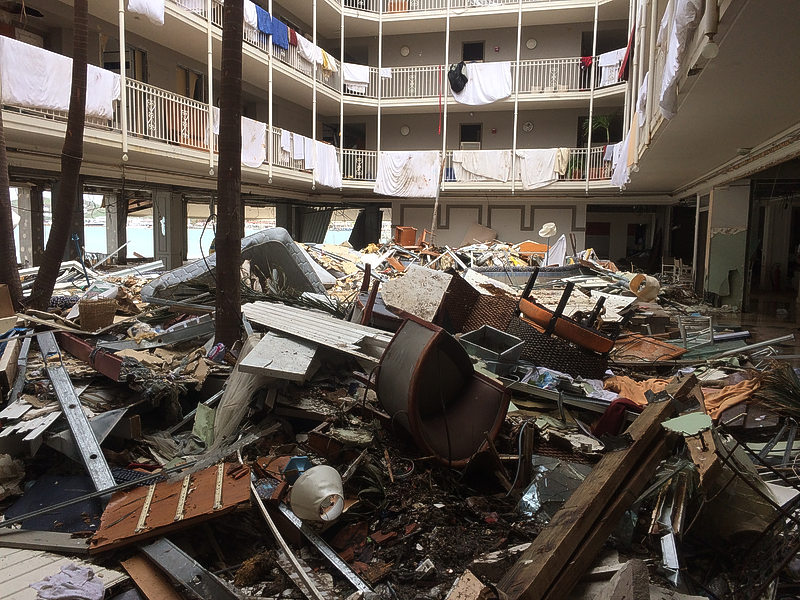 MARIGOT–Seashore buildings facing the brunt of Hurricane Irma’s wrath, from the Bay Of Marigot down to Sandy Ground and Baie Nettle, were hit especially hard during the epic storm and dire warnings of extreme flooding from the expected storm surge were not issued lightly by authorities, including the advice to evacuate to shelters.

The scale of destruction at Le Beach Hotel in Marigot is mindboggling. Put the hotel in a different context of war-torn Syria and picture a bomb dropping through the roof. The glass canopy high over the ground floor has gone, as has the hotel’s roof, casting eerie sunlight down onto a mass of debris strewn around the once-elegant lobby and reception area.
The railings of walkways on the upper floors of the atrium are covered with sheets and bedding hung out to dry. Compare all this to the comparatively minor damage from Hurricane Gonzalo in 2014 when the lobby was flooded, but furnishings still salvageable.
Irma was a different beast entirely. The hotel’s owner Patrice Seguin is walking the floors in work clothes and gloves with clean-up staff to see what is salvageable, if anything. But it’s a fruitless task. Where do you even begin?
“The hotel is dead,” he says despondently, before pointing over to the ocean-side area of the lobby. “There was a bar there, but it has completely disappeared. I see no trace of it whatsoever.”
Seguin said some 100 guests had elected to remain in the hotel, staying in rooms on the first, second and third floors, despite a government warning the day before to evacuate. He assures that all of them survived the storm safely in what must have been a traumatic experience.
On the ground floor the full fury of Irma’s 1½-metre-high storm surge roared through the lobby, obliterating everything in its path, including the reception office, several ground-floor hotel rooms, meeting rooms, fitness centre, restaurant, etc.
Seguin wants to rebuild and open again despite the devastation. He visualises a beautifully-renovated hotel and a classy marina across the road from the hotel’s car park, replacing the ugly graveyard of hurricane-wrecked yachts that is there now.
“I’m waiting to hear what help we are going to get from the Collectivité and France for reconstruction funds. I don’t want to start any renovation by myself. I need to know what the strategy is for the island and for the hotel sector on the French side for the next three years. And I have to discuss with my financial partners the way forward. I won’t get financing from the banks without presenting a global project,” he said.
Seguin estimates the damage to Le Beach Hotel is in the region of 15 million euros. He does not see the hotel being ready to receive guests again for at least two years.
“It will take three months for the government to come up with the reconstruction project. Then it’s 16 months of renovation work. The first goal will be to be ready for October or November 2019, but it could take longer than that.”
Farther down the coastline in Baie Nettle, Le Mercure Hotel fared somewhat better, being on the Lagoon side of the road.
Owner Arbia Baki said his hotel damage runs into 9-12 million euros, according to insurers.
“We still have 80 rooms that are functioning out of 200,” he explained. “We will start rebuilding the roof first in five months from now. 125 persons were staying in the hotel for the hurricane, but only about 25 of them were tourists and the rest were residents or locals. We were told by the government to accommodate them. They stayed two weeks, but many returned to France.”
The hotel sustained extensive damage to hotel rooms, furniture, plumbing, electricity, refrigerators, the reverse osmosis water plant and the laundry room.
Baki said 40 of the hotel’s 61 employees had gone back to France immediately afterwards without giving any notice and probably will not return.
“We are trying to do our best. The restaurant is open and every night we feed 200 people. That’s because we have 350 military personnel and 50 from Civil Protection. The 30 guests we have in the hotel now are mostly people who are here to rebuild the hotel – insurance companies, architects, engineers, construction people, etc.”
It was a cruel injustice for both Le Mercure and Le Beach Hotels to be devastated by Irma after both properties spent considerable sums on upgrading.
“We started an 8-million-euro renovation programme three years ago, only to see all that work gone to waste,” Baki rues. “On top of it we are underinsured, so we are hoping the reconstruction funds from government will make up the balance needed. But I anticipate in one year from now we will be in very good shape again.
“Eighty of our rooms are in perfect condition. And now we have water and electricity back. The military are using all the rooms that are damaged. They are putting in their own furniture and camp beds. Some of them are sleeping seven to a room. We also have 80 Gendarmes staying here.”