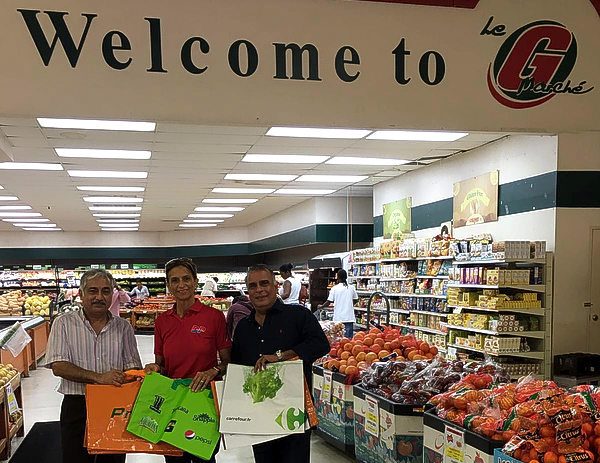 PHILIPSBURG–Le Grand Marché, Le Gourmet Marché, Carrefour Market and Prime Distributors Cash and Carry have begun the switch from plastic bags to reusable bags in an effort to help reduce their carbon footprint and reduce the amount of plastic garbage on the island.

The three supermarkets will be giving away a combined total of between 5,000 to 8,000 sturdy reusable bags for free to its customers as of today Friday, September 15. The intention is to gradually replace plastic shopping bags. The free bags are a way to help customers with the change. The initiative is costing the companies about US $20,000.

Once the free bags have all been given out, the reusable bags will then be sold for US $1 each during the month of October with the establishments subsidizing the cost. As of November the bags will be sold for the regular price of US $2 each.

One month after the introduction of the reusable bags, as of October 15, the supermarkets will start charging a small fee of US $0.10 per plastic bag for customers who still want to use them. This measure is to serve as a deterrent for the use of plastic bags.

President of Parliament Sarah Wescot-Williams was presented with the first set of reusable bags recently. “This effort is a worthwhile corporate initiative, but in my opinion, should be supported by legislative action,” Wescot-Williams said. “There is a draft initiative ordinance calling for a ban on plastic bags. However, a more direct way would be to outright ban the usage by inserting this in the General Police Ordinance (In Dutch: Algemene Politiekeur). This is the way that Aruba, for example, has instituted the ban on plastic bags, of course to be introduced over time,” Wescot-Williams added at the brief handing over.

Prime Distributors official Danny Ramchandani, Carrefour Market and Le Grand Marché official Anil Sabnani told The Daily Herald on Thursday that customers who shop while the bags are being given out for free will get enough free bags to hold the quantity of groceries they purchase. The reusable bags are customized for each of the supermarkets and carry the logo of each establishment.

Ramchandani and Sabnani said the establishments wanted to make the effort to switch to reusable bags to help reduce the garbage problem in the country and also help the environment. Plastics are not good for the environment and the establishments wanted to do its part to help protect and preserve it.
Source: Daily Herald
Le Grand Marché, Le Gourmet Marché, Carrefour, Prime switch to reusable bags