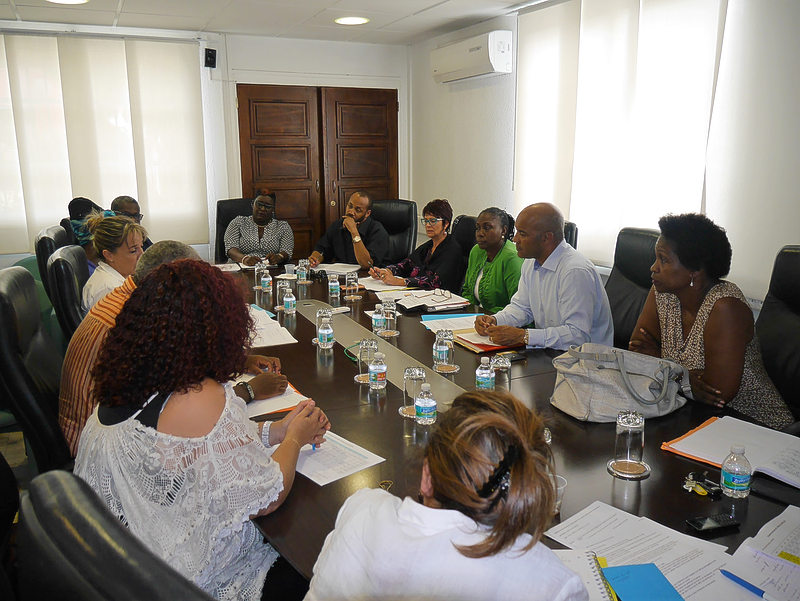 MARIGOT–As promised, President Daniel Gibbs and Vice-President in charge of Solidarity and Families Annick Petrus met Tuesday with officials of Le Manteau, the homeless shelter in Marigot, to resolve matters of security at the establishment.

Le Manteau has been closed since April 30, 2017, when one of the social workers was assaulted by a user of the shelter. The offender was subsequently arrested on May 5, 2017, but the shelter remained closed with employees exercising their right in refusing to work without adequate security.

The working meeting on Tuesday included the participation of Secretary-General of the Préfecture Thierry Mahler and Head of Social Cohesion, Marie-Hélène Coutant.

At the beginning of the meeting, President Gibbs praised the work of volunteers and valuable assistance provided to the territory by the association that runs Le Manteau, especially in regard to assistance of people in distress.

Vice-President Petrus reassured the President of Le Manteau on the willingness of the Collectivité to accompany Le Manteau alongside the State’s institution of guardianship (the State), responsible for ensuring that the structure is optimised in terms of management and welcome.

At the end of a constructive exchange, Gibbs suggested forming a working committee which will study the possibility of accompanying Le Manteau within the legal and financial constraints of the Collectivité, the majority party having to support all of the associations that work in the field of assistance to the people in a spirit of fairness.

The Commission will also lay the foundations for a new partnership agreement between the association and the Collectivité, a prelude to a better understanding between each party. The first priority to be taken into consideration will be security and integrity of the buildings.

In the short-term and in response to the urgency of securing the site, Gibbs and Petrus gave assurance that access to the building will be protected by the installation of an entry gate and a fence around the perimeter of the site.