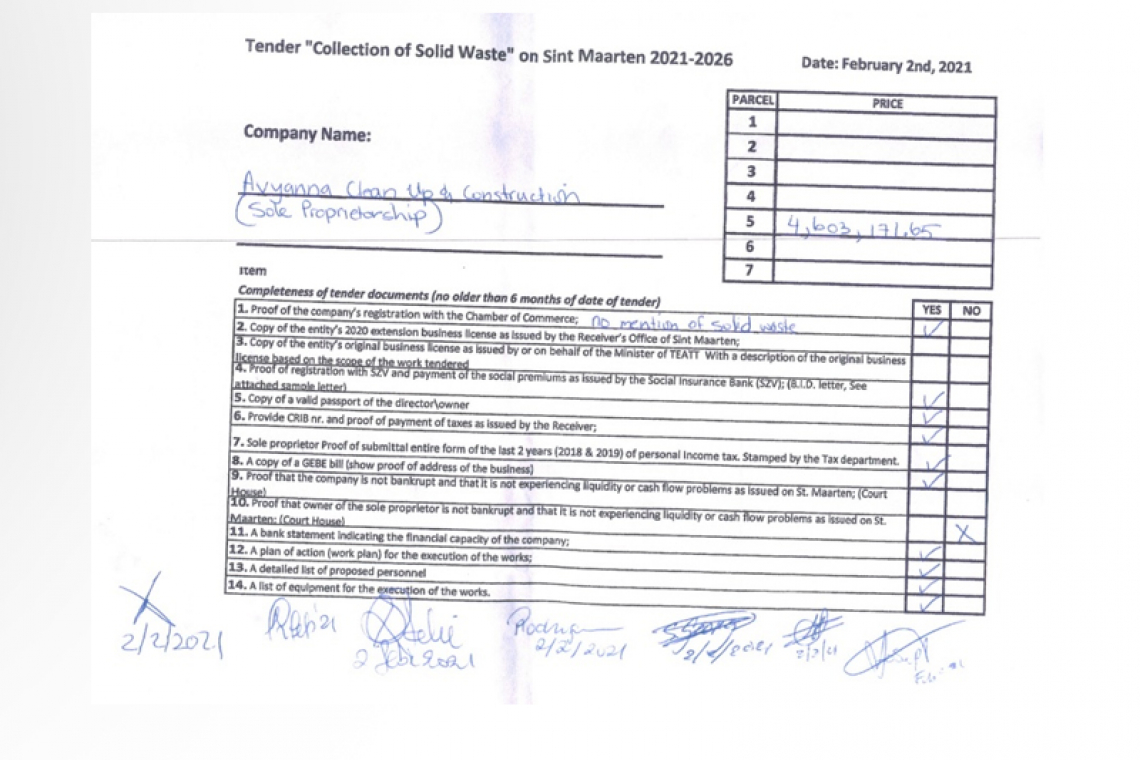 PHILIPSBURG–After providing answers to 21 questions from Members of Parliament (MPs) posed on June 29, Minister of Public Housing, Spatial Planning, Environment, and Infrastructure VROMI Egbert Doran on Wednesday aroused amazement by saying that he had not received copies of the documents that were leaked to Party for Progress (PFP) and subsequently sent to Government, the Ombudsman and the Governor of St. Maarten.

Doran addressed Chair of Parliament Grisha Heyliger-Marten, saying: “I have taken note of the meeting that was held on Monday, and I have also taken note of documents that were published in the paper [The Daily Herald – Ed.]. I would like to know if these documents can be provided to me, please.”

Doran had been invited back to Parliament during the continuation of the June 29 public meeting of Parliament on the final report of the Ombudsman regarding the tendering and awarding process of the garbage collection contracts 2021-2026. He had previously maintained that he had fully cooperated with the Ombudsman’s investigation before ducking a motion of no confidence from PFP by asking for at least two weeks to answer 21 questions from MPs. Two weeks became six weeks.

The continuation of the meeting was highly publicised after PFP on Monday, still missing essential information regarding the tendering process, had booked the mentioned documents with Parliament. The documents were leaked to PFP by an anonymous source and comprise copies of the checklist for completeness of tender documents each participant in the bidding process for garbage contracts had to fill in, as per the terms of reference (ToR) for this tender.

Another document shows a list of companies that had been disqualified. From this list, it becomes clear that of the five companies awarded contracts by the Government of St. Maarten for the collection of solid waste from 2021 to 2026, two had been disqualified during the tendering process. However, these companies – Garden Boyz and Avyanna Cleanup and Construction – are currently under contract for a total sum of NAf 9,689,971.65 in five years.

In a letter to Heyliger-Marten on Monday, PFP MPs Melissa Gumbs and Raeyhon Peterson requested that the attached documents be sent to Government to be reviewed for verification of authenticity.

“I see that it was cc-ed to Government,” Doran said to Heyliger-Marten, “but even before coming here we have not received those documents.”

Heyliger-Marten replied: “Would you like a copy now, at this point in time?” Doran responded in the negative. Heyliger-Marten noted: “Because it was already sent.”

Doran then said: “What happens sometimes is that we see things that, documents are sent, but … . I doublecheck email,” prompting Heyliger-Marten to ask: “They were not booked in on your end completely as yet?”

“I don’t want to assume something,” Doran said. “I am just saying: If it wasn’t sent, if it can be sent and if I can be provided with a copy now, I would really appreciate it. Thank you.”

Asking for clarification, MP Rolando Brison (United People’s (UP) party) said: “If the Minister would want to validate these documents, what would be his method for doing that? Would you then call the department head, you go in together?

“What is the process going back, if there is a need to validate documents or to review anything? Or even while the tender was going on, if you want to now grab those documents and send them over to the Governor, please outline the steps that are there? To make it clear whether that process is transparent and secure or not.”

Doran responded: “The original documentation would need to be compared to the leaked documentation. This, to my opinion, should be done by experts in the field. The original documents are located behind lock and key, the location is the office of the department head similar to the other documents of this nature. The keys are in the possession of the department head and remain in his possession. I have never been in possession of such keys, nor is any member of my cabinet, or anyone else for that matter.”

Meanwhile, assistants in Parliament provided Doran with copies of the leaked documents. “Based on a quick review, I must say that these documents seem to be altered,” Doran said, “As you can see these were wiped out.” He pointed at Yes/No boxes on an evaluation form. “These will have to be confirmed by experts. And I come back after the investigation is done.”

According to Peterson, verification can be done much more quickly. “When it comes to the validity of these documents, they can be verified very easily,” he said. “Those seven persons behind the signatures, call them up, put them under oath, and ask them if those documents are real. Easy. But again – deflection.”

The evaluation committee started off with seven persons, four of them part of the Infrastructure department. By the end of the tender, this committee consisted of three persons, two of whom were political appointees, cabinet members of the Minister’s office.
“But is it not good to note,” said Peterson, “that the financial controller of VROMI, a lady who I personally know of standing integrity, as per her job description, was the first one to leave the seven-man committee? Maybe it’s also good to note that since then, the good lady also quit. She left the ministry because of the obvious corruption that is taking place.”

The documents received by Parliament are indeed some of the individual, parcel-based, completeness checklists, which Doran publicly stated had been sent to the Ombudsman’s office, Gumbs said.

She read out loud footnote 38 on page 17 of the final report, in which the Office of the Ombudsman stated: “Because the Minister of VROMI has refused to provide the individual evaluation sheets for the completeness of the tender documents signed by the evaluation committee members, the Ombudsman was unable to verify these statements.”

Gumbs reviewed the documents with points from the final report in mind. “What else is there to conclude but bid-rigging?” Gumbs said. She then proceeded to read the motion of no confidence.

“All of this could have been avoided,” said Brison. “It is tough to see that things could have gone completely differently.”

He demanded a very clear explanation from Doran as to why these documents had been missed. “No one in this Parliament will know how I will vote for such a motion until I receive the answers and the assurances I need from the minister,” Brison said.

“It would therefore have been disqualified,” said Brison, who pointed at the checklist for Parcel 5 that had the box for bank statement marked off: it was not missing.

He concluded that the mystery was solved, as Parcel 5 was the parcel that the company was awarded. “Maybe the minister wasn’t aware of the documents. I don’t know,” Brison said. “But there needs to be a good explanation for this Madame Chair. Because unfortunately, and shame on The Daily Herald for not doing their proper due diligence before going and accusing companies of this type of thing as well.”

Brison failed to present the list of companies that had been disqualified during the tendering process. This list shows both Avyanna and Garden Boyz.

This newspaper, in the article “Papers reveal two current garbage collectors were initially disqualified”, which appeared on Tuesday, did not mention a missing bank statement.

The article named the other documents that Avyanna had failed to provide, as per quote from the article: “Avyanna Cleanup and Construction is registered as a sole proprietor of Mhalik Ottley, who failed to register the collection of solid waste as his business activity at the Chamber of Commerce, did not provide a business licence, could not provide proof that the company is not bankrupt or that the company is not experiencing liquidity or cash flow problems.”

In his closing words in Parliament Doran, referring to the presentation by Brison, asked for rectification by this newspaper. However, the newspaper did not write what was alleged in Parliament.

Doran asked for 10 days to provide answers to additional questions and his request was granted.