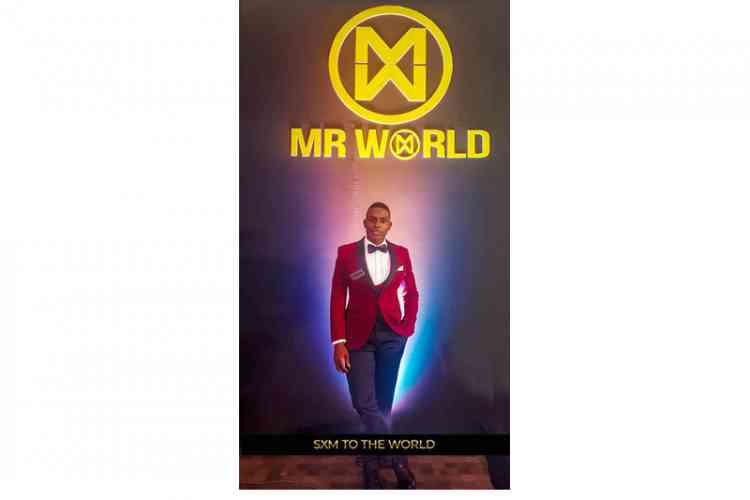 PHILIPSBURG–Learie Hall will be representing St. Maarten at the Mr. World pageant in the Philippines today, Friday. Representatives of more than seventy countries have been in Manila, Philippines, since August 6, competing in various preliminary competitions leading up to the big night.

Thanks to the sponsorship of the Ministry of Tourism, Economic Affairs, Transport and Telecommunication (TEATT), the St. Maarten Tourist Bureau and donations from both the public and members of the business community, Hall boarded a Delta flight on August 5 to begin his journey to the Mr. World crown.

Hall is looking forward to the support of not just St. Maarten, but for the entire Caribbean to tune in and cast their votes for the win.

The Mr. World pageant criteria call for delegates to compete in the following categories: swimwear, national costume, talent, and tuxedo. The introduction video and social media page contact will also be judged. Hence it is important for the Caribbean to unite and cast their votes.

Hall and his team request the Caribbean at large to download MobStar and follow social media pages related to the pageant on Facebook and Instagram, such as Posh Productions (POSH), Mr. World, and Mr. World St Maarten. They also ask persons to share promotional material of Learie Hall as Mr. World St. Maarten and to be sure to use the hashtags #MrWorld, #MrWorld2019, #MrWorldPH, #Philippines, #MrWorldSXM, #POSH #SXMTBA.

Hall’s pageant tour will take a slight break when he returns to St. Maarten on August 26. He will spend a few months carrying out his platform on wellness, as he hosts seminars and visits schools to bring awareness of physical fitness, proper eating practices and mental illness.

He will also champion the Bow Tie Club, an all-male movement under the Posh Productions umbrella. The Bow Tie Club will connect young boys and men who lack role models with dedicated, positive men in the community who will act as their mentors.

Meanwhile, Hall will be gearing up to travel to Connecticut January 11-17, 2020, to compete for the Mr. Caribbean Universe crown on behalf of St. Maarten. Like the Mr. World platform, the following categories make up the completion: swimwear, national costume, talent, tuxedo, social media promotional videos, and social media page contact.

POSH founder and Director Anna Richardson is highly determined to have St. Maarten recognised on international pageant platforms. She sees pageantry as a tourism tool. As St. Maarten has a one-pillar economy that is highly dependent on tourism, she is passionate to help promote her beloved St. Maarten on all auspicious and prestigious pageant stages throughout the world.

Pageantry is not a cheap endeavour. As such, POSH, Hall and his team expressed gratitude to TEATT Minister Stuart Johnson, St. Maarten Tourist Bureau Director May-Ling Chung and staff, and Education, Culture, Youth and Sports Minister Wycliffe Smith for their support. Special thanks went to Culture Department Head Clara Reyes and staff, as well as to Topper’s Rhum for sponsoring Hall’s Cultural Wear at the Mr. World pageant.

They also thanked various businesses in the community that supported the drive, while also saying that more donations and/or “in-kind” support are needed.

For more information, persons are asked to send an e-mail to