Home The Daily Herald Ledecky gets third gold, Franklin a first in Rio 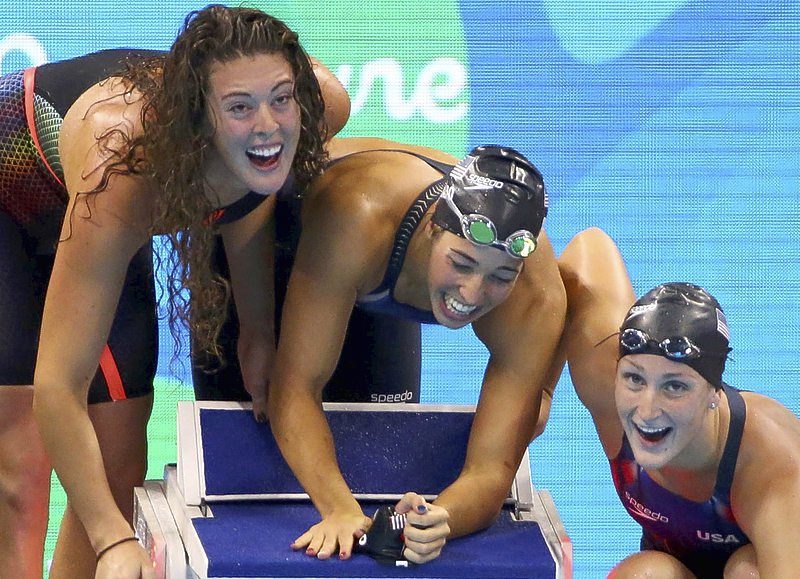 RIO DE JANEIRO–Freestyle queen Katie Ledecky won her third gold medal of the Rio Olympics by anchoring the U.S. women to victory in the 4×200 metres freestyle relay on Wednesday while struggling Missy Franklin opened her account without being in the water for the final.

Australia, who led until Ledecky dived in and turned the race around, took silver and Canada the bronze.
The U.S. were the defending champions but only veteran Allison Schmitt, who swam the leadoff leg in Rio, was in the race lineup from that London 2012 golden quartet that also beat Australia into second place. Leah Smith and Maya DiRado swam second and third respectively before Ledecky, who won the 400 freestyle on Sunday and 200 free on Tuesday, brought home the gold with a typically powerful swim from behind.
Franklin, who won four golds in London four years ago but suffered a dramatic loss of form at the U.S. trials, swam in the heats and collected a gold for doing so despite being dropped for the final. So too did Melanie Margalis and Cierra Runge.
“It’s such a great honour to be a part of a USA relay team,” said Ledecky, still only 19 but the outstanding female swimmer on the U.S. team.
“I think I was prepared for any circumstance, whether we were ahead or behind. I just knew that these three girls were going to put me in a good position to finish it out and I knew I could do it,” she added. “It’s so easy to get up and swim fast when you’re swimming for three other people.”
China led at the start before Australia, with Emma McKeon swimming the second leg, handed over in the lead to Bronte Barratt. With DiRado closing in on Barratt but still behind, Ledecky had work to do and she went about it with a vengeance to take the lead with just over 100 metres to go and then powering home in seven minutes, 43.03 seconds.
Tamsin Cook touched out for Australia in 7:44.87 and Canada’s anchor Penny Oleksiak finished close behind in 7:45.39 with China fourth.
DiRado’s gold completed her set, having already earned a silver and bronze in the two women’s individual medleys. “I was so excited to get the call up today to be on this relay,” said DiRado.
“It was a dream to be on a U.S. relay and to win gold. I’m just so happy I didn’t mess it up and I gave Katie a chance. We’ve got the rainbow now,” she added. “It feels really good.”
The race may have been Schmitt’s last swim but she was not ready to confirm anything. “I am grateful for where I am right now, to be able to stand up there and hear our national anthem is something I am definitely soaking in,” she said. “I think my emotions are so high right now that I just want to soak that in and figure out the rest later.”