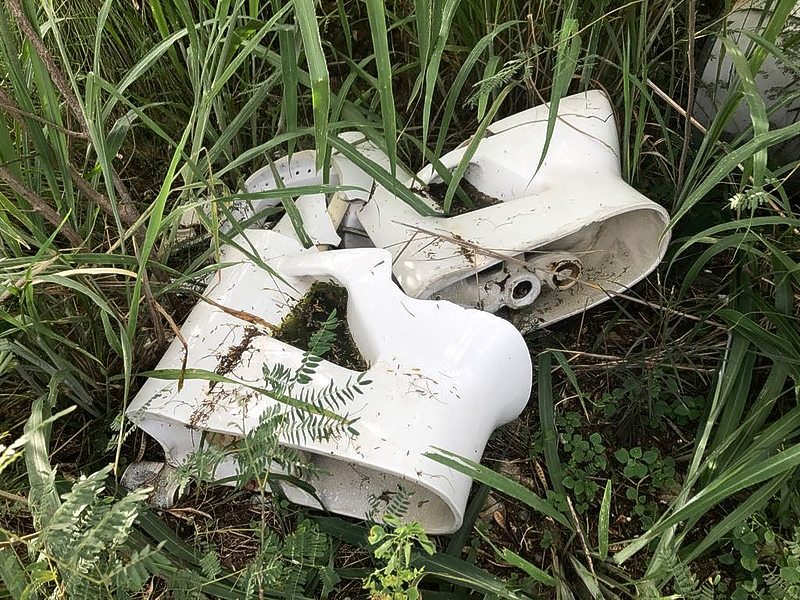 An old toilet disposed of at the side of the road.

PHILIPSBURG–Health Minister Emil Lee is calling for vigilance in the fight against mosquitoes, saying it does not look like the country is winning the war against the flying insects.

Lee told reporters at the Council of Ministers press briefing on Wednesday that his heart dropped when he heard that the first case of a baby born with microcephaly was recorded at St. Maarten Medical Center (SMMC) recently. The Minister confirmed that the person is a non-resident of St. Maarten, but quickly noted that the person could have very well been from St. Maarten. Saying that his heart goes out to the family, Lee said the Ministry has not received any official report on the case, but said there are multiple possible reasons for the condition, one of which is Zika. It has not been confirmed whether the baby acquired the condition as a result of Zika.

Garbage disposed of at the side of a road.

Lee is not happy with how some residents are disposing of their garbage as these can create mosquito breeding sites. “When I look around the island I don’t find we are winning our war against mosquitoes,” he said. Lee showed several pictures that he snapped while walking his dog, of garbage such as an old toilet and a broken-up wooden structure, that were disposed of at the sides of the streets in the Dawn Beach Estate area and close to the Westin St. Maarten Dawn Beach Resort and Spa. In one case, a dumpster was located just down the road from where the trash was dumped. “All [the garbage – Ed.] are potential mosquito breeding sites,” Lee said, noting that it is disheartening what is happening around the country. “It’s like mopping with the faucet on … In the end, if citizens don’t get involved in reducing breeding sites it would be just a matter of time before our luck runs out.”

“My heart goes out to the person [who had the baby with microcephaly – Ed.], but St. Maarten should consider this as a near miss and we have luckily dodged the bullet, but if we are not proactive about mosquito breeding sites, it could easily happen here,” Lee said urging the community to be proactive.

Minister of Public Housing, Spatial Planning, Environment and Infrastructure VROMI Christophe Emmanuel called the dumping of garbage on the roadsides disturbing. He said the items could have easily been taken to the landfill and disposed of. He urged persons to make use of the landfill to dispose of their large garbage items as provisions have been made for the different types of garbage items.