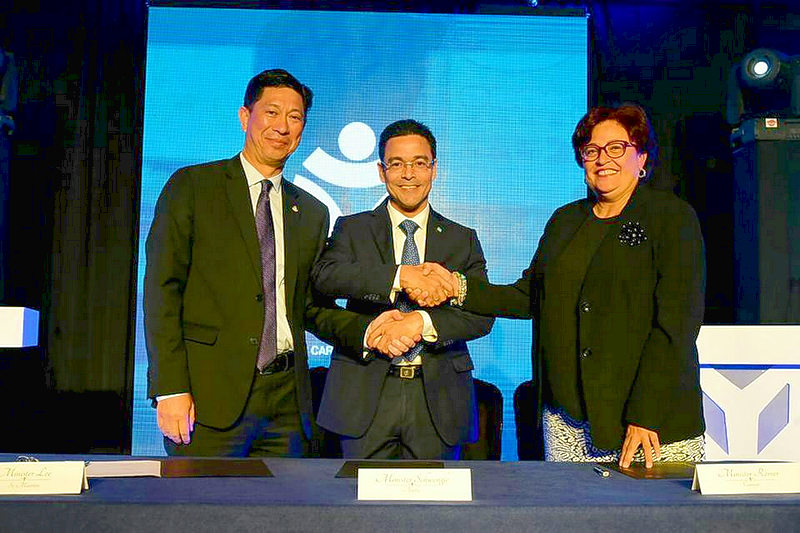 PHILIPSBURG–Health Minister Emil Lee on Wednesday elaborated on the Letter of Intent (LOI) signed amongst the health ministers of St. Maarten (Lee), Curaçao and Aruba during the just concluded Health Care Conference Aruba (HCCA). Lee told reporters at the Council of Ministers press briefing on Wednesday that while the LOI is still to be ratified by the Council of Ministers it will have no financial consequences for the country and is based on previous agreements. The LOI focuses on several areas including legislative cooperation. “We all have the same concerns,” Lee said noting that discussions are currently being held with the Ministry of Finance looking into the possibility of a tax based on alcohol, tobacco and sugar drinks.” He said other countries are pursuing a similar route.

Preventative care is another area focused on in the LOI to ensure that focus is placed on communicable diseases in particular such as cardiovascular disease, obesity, diabetes and cancer. Thanks to the LOI, parties will be able to share best practices and protocol and educate populations on how preventative care protocols are being executed. “All hospitals are working towards accreditation and this gives us good synergies. We all seem to be pointed in the same direction working on creating benchmarks to see how individual hospitals are performing,” he said. One area to gauge performance is calculating how often infection rates are reported at the local hospital and comparing it to other institutions to get an idea as to how the local hospital is performing.

Another area in the LOI is seeing whether the three insurance companies in the respective countries can get together and, for example, purchase one software [programme – Ed.] together rather than each purchasing their own.

On the issue of gathering data, Lee said he would like to see a dashboard developed for hospitals and insurance companies that give an idea on how they are performing individually.

Another area is how to address waste and efficiency in health care organisations particularly when it comes to joint purchasing. He said talks centred on referring patients from the three countries to the same hospital. This would give the countries more leverage on negotiations as well as ensure that services offered are up to par.

A follow up meeting will be held during the last week of July and talks will centre on how to move further ahead.

“If we want to make sure we are delivering the right care for people we need to make sure that the system is working. Everyone has a role to play to ensure that we deliver the best,” Lee said.

The conference was attended by policy makers, surgeons, health professionals and consultants amongst others and focused on improving the overall quality of care.

In addition to the LOI signed amongst the health ministers, a cooperation agreement was signed between the Inspectorate of Public Health of St. Maarten and Aruba to establish a close cooperation among parties and to facilitate mutual exchange of manpower and knowledge amongst other things. (See Wednesday’s paper).