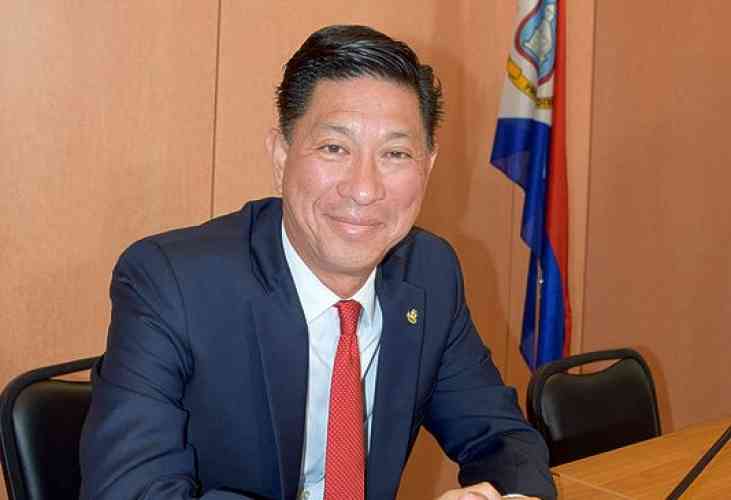 PHILIPSBURG–Caretaker Minister of Health, Labour and Social Affairs VSA Emil Lee has submitted a letter to Governor Eugene Holiday and has made his position available.

Lee confirmed this to The Daily Herald on Sunday evening.

Parliament passed a vote of no confidence against Lee last week Tuesday towards the end of the debate on the 2019 budget. The motion, which was presented by governing coalition member United Democrats (UD) MP Luc Mercelina, was passed by all seven members of the opposition and Mercelina voting in favour and the seven remaining members of the coalition voting against. The passing of the motion goes down in history as the first time an MP in St. Maarten initiated a motion to dismiss a minister appointed by his own coalition.

Prior to the passing of the motion Lee sought to have Mercelina abstain from voting on his motion by quoting Article 53 of the constitution, which states that MPs shall refrain from debating and voting on issues, including appointments, suspensions and dismissals, that personally concern them, their spouses or relations by blood or affinity to the second degree, or in which they are involved as mandatories.

However, this was not accepted by Deputy Chairperson of Parliament Claude Peterson, sitting in for Sarah Wescot-Williams.

Lee had said earlier in the same budget meeting that if the coalition had asked him to step down, he would have gladly done so. However, he said, “MP Mercelina couldn’t get the support of any of the other member of the coalition, who are updated on a regular basis as to what the status of the various ministries are. Since motions require at least two signatures and because the motion couldn’t get that support from the coalition you enlisted the support of opposition.”

He said Mercelina seemed to be struggling with blurred lines, balancing his diverse and conflicting perspectives.

“As a matter of fact, for the record, I believe that an actively practicing MD [medical doctor – Ed.] that disagrees with the vision and actions of the Minister of Health, despite being in alignment with the governing programme, is using his other function of MP to exert influence, and ultimately to bring a motion of no confidence against the minister,” Lee had said.

Mercelina made clear in the motion that any Minister who receives a vote of no confidence by parliament must make his or her position immediately available to the Governor of St. Maarten. “In other words, the Minister has to resign immediately,” the motion read.

The motion also sought to prohibit the minister from signing any agreements and/or contracts or any long-term policies or financial engagements that might obstruct or encumber any new incoming VSA Minister “from functioning adequately and that might commit and/or effect and/or bind the country for a long time/term in whatever way.”

The motion also requested that Lee, as a caretaker Minister (if the motion of no confidence were passed) to instruct management and board of social and health insurance provider SZV to refrain from entering long-term financial commitments, hiring of new personnel in management functions, entering into long-term agreements and signing any contracts that might affect or bind SZV in one or the other way for a long time.

Lee is also “instructed” not to take any decision as caretaker VSA Minister that would bind St. Maarten or entities in question to the construction of a new hospital.

Mercelina said in the motion that Lee is “being held personally responsible for any decision taken following this motion of no confidence against him that may have serious financial and administrative consequences for country St. Maarten and/or government-owned companies and/or entities such as the SZV.”