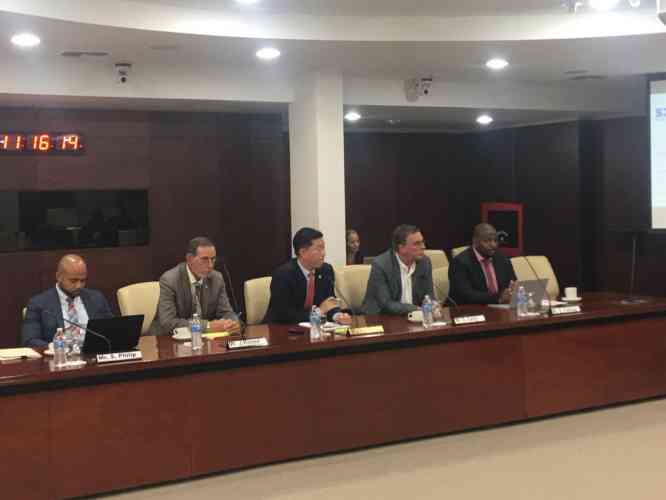 Health Minister Emil Lee with members of his delegation in parliament on Friday.

~ Major funds operating at a loss ~

PHILIPSBURG–Health Minister Emil Lee painted a grim picture of how some of the funds managed by Social and Health Insurances SZV are doing financially, during an urgent meeting of the Central Committee of Parliament on Friday.

Two of the funds managed by the insurance service provider are operating at huge losses. According to the information provided to MPs, while the AOV/AWW (old age, widows and orphans pension), AVBZ (long term care insurance) and Cessantia (severance pay insurance in the event of bankruptcy) are financially healthy, the two largest funds – FZOG (retired civil servants’ health insurance) and ZV/OV (sickness and accident insurance) – are operating at huge losses. There are 67,000 workers under the ZV fund.

Lee said there were no significant changes in expense pattern for the ZV/OV fund after the 2017 hurricanes. In 2009, 60 plus seniors (which is now seniors aged 62+ since the pension age has increased) had been added to the ZV medical insurance and the number of seniors in the fund is growing at a high pace.

SZV’s total current assets as of 2017 stood at 346.8 million, including its financial assets 252.2 million, trades and receivables 40 million, cash and equivalents 54.6 million. Its total liabilities stand at 54.3 million, making the current ratio 6.39.

Alluding to Government Accounts Bureau SOAB’s comments on the structural issues affecting the funds, Lee said a number of structural legal and administrative problems remain in the different funds.

The number of “former employees” under ZV seems very high.

Medical referrals abroad are not properly regulated in ZV law and FZOG (retired civil servants) get 100 per cent medical cost reimbursed, while it should be 90 per cent for medical and 75 per cent for lodging, according to the law. A legal minimum for ZV and OV fund reserves is not in place.

Lee said the SOAB acknowledged that introduction of a General Health Insurance would repair most of the structural problems observed in the funds.

Government is responsible for the cost of civil servants’ health care (PP-card holders and premiums for former employees). After St. Maarten obtained its new constitutional status in 2010, Lee said government did not always make the payments owed to SZV, creating arrears.

Based on an instruction from the Kingdom Council of Ministers in 2015, St. Maarten, SZV and Government made a plan to settle the debts to SZV. The new Government Administration Building was used to settle part of the debt. SZV invested in and completed the building and today collects rent from government, which Lee says is a win-win for government and SZV.

He said challenges in government revenues in 2016 and 2017 resulted in new accumulated debt from government to SZV. “Government is now actively working with SZV on a solution,” he told MPs.

Lee said the health care funds are structurally unbalanced, which is the result of attempts to cover more vulnerable, high risk groups without the necessary funding. He said that while short term measures can stop the bleeding, the underlying trend will continue. In the long run, only fundamental reform will help.

Short term measures to address the issues being faced by some of the funds include cost reduction focus and adding new specialisations at St. Maarten Medical Center (SMMC) such as ophthalmology, urology and orthopaedics, which will mean that more patients will seek treatment in St. Maarten and fewer will be going abroad.

Other measures are pharmaceutical cost control, which will take effect in 2019, the development of an automated system between SZV and health care providers (pharmacies, doctors, hospital), efficient billing, control against abuse and making fewer mistakes.

Other short-term plans include the registration of medical professionals, prevention/education, increased compliance in paying premiums and the reduction of SZV overhead cost.