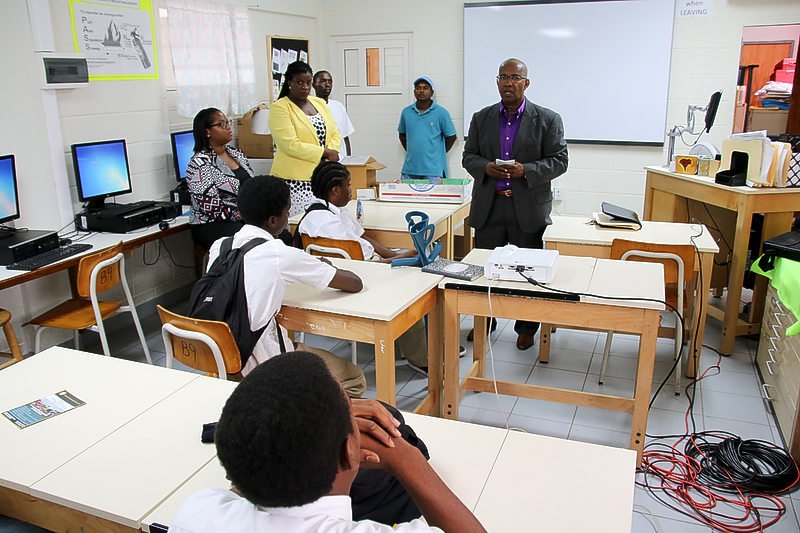 Priest met with the students on Monday to discuss the details. Their employment can commence as early as Monday, May 30.

These young graduates will be employed in the field of construction and it is the intention that they will grow within this industry. Each employee will be provided with a safety hat and a pair of safety shoes to prevent any mishaps on the job. They have been informed of what is expected of them on the job and how they will be compensated. They are all very eager to get started and are looking forward to their first day on the job.

Many of the island’s high school students are busy with their final exams. Priest wants to introduce more programmes to allow students to begin work as soon as they graduate.

“Some of our students have applied for study financing and hoping to receive it on successfully completing their final exams. This means that many of them will be leaving to go abroad to further their studies, or to attend University of St. Maarten and NIPA. However, the majority of those graduates will remain on the island seeking employment for a year, some until they decide to further their studies. The remaining students, in the hundreds, will be seeking permanent employment starting the beginning of June,” he said.

Priest said in a press release on Monday that the island is at a very serious crossroad with hundreds of young people entering the job market and fewer jobs to offer them. OSPP had submitted a law that was passed in 1989 in the Parliament of the former Netherlands Antilles commonly referred to as the “Lei di Bion,” by all the Members of Parliament (MPs) of St. Maarten and the Council of Ministers.

Both the MPs and the Government of St. Maarten – National Alliance, United People’s party, Democratic Party and United St. Maarten Party – refused to even entertain the existence of this law and the benefits for young people, said Priest.

This law, if it had been accepted, would have allowed businesses to employ young people ages 18-25 who have been registered as unemployed at the Labour Department. The businesses would have been exempted from paying payroll taxes for those employees if they were employed for at least one year.

“We proposed instead of exempting the businesses from paying payroll taxes to provide them with a tax credit of 50 per cent of the minimum wage at the end of the year. Our proposal would not have interfered with the collection of payroll taxes by the Government,” said Priest.