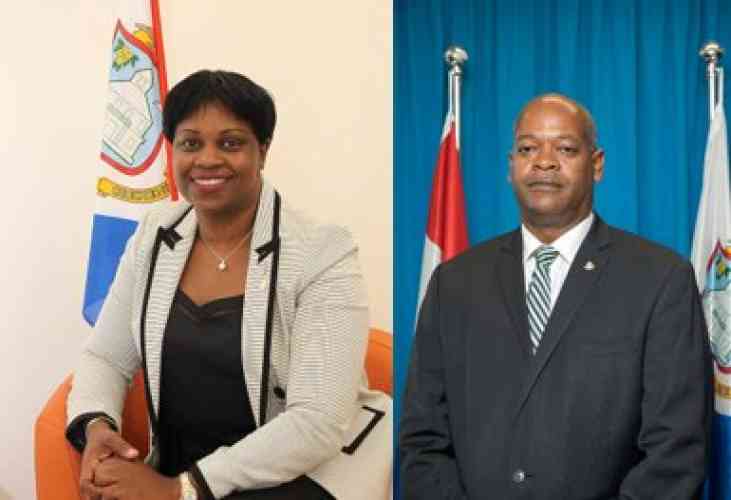 PHILIPSBURG–Caretaker Prime Minister Leona Romeo-Marlin and caretaker Justice Minister Cornelius de Weever stepped down from their positions on Thursday, fifteen days after a motion of no confidence was passed against the two to demit office with immediate effect.

The resignation letters from the two were accepted by Council of Ministers. The resignations reduce the number of caretaker ministers in the Council from six to four (see related story).

Romeo-Marlin said her move was to “depoliticise important matters that are pending decision at Parliament.”

In a letter addressed to Governor Eugene Holiday, new Chairperson of Parliament William Marlin had indicated that the new coalition no longer considered Romeo-Marlin answerable to Parliament.

Romeo-Marlin said in a statement to the media that she had stayed on as caretaker Prime Minister after the motion of no confidence because she had already tendered her resignation on September 23, and had stayed on while Holiday had the resignation under advice. “The governor requested the Council of Ministers to stay on as a caretaker government,” she said.

According to Romeo-Marlin, the constitutional status is not unambiguous.

“The conclusion derived from the writings of constitutional scholars is inconclusive. It suggests that if there is no consensus that after the motion of no confidence of September 25, I should actually leave.

“There is, however, a consensus amongst the constitutional scholars that when a motion of no confidence specifically targets concrete actions or lack thereof by a specific ‘demissionaire’ [acting – Ed.] minister, that ‘demissionaire’ minister, if asked to leave immediately, should vacate his/her position immediately,” she said.

She said the motion of September 25 did not specifically target any concrete actions or lack thereof attributed to her as prime minister. “The conclusion was therefore justified that a situation that would be supported by a constitutional consensus had not occurred. Therefore, I stayed. I made it perfectly clear that, as I had already tendered my resignation to the governor, once he accepts the resignation with immediate effect, I would leave with immediate effect.”

She said the Chairperson of Parliament had sent a letter to the governor on October 1, with a copy to government, which required additional attention and reflection.

“From this letter, I had to conclude that the current majority in Parliament considers my continued presence in the Council of Ministers as ‘demissionaire’ prime minister so politically controversial, and as such unacceptable, that Parliament no longer considers me answerable to Parliament and will not entertain my presence therein,” she said.

“The chairman of Parliament requested the governor for clarity on my ‘demissionaire’ status in view of the pending handling of the money-laundering and anti-terrorism legislation to meet [Caribbean Financial Action Task Force] CFATF requirements, which was scheduled for a public meeting on October 9 but now rescheduled for October 11.

“As Council of Ministers, we have always emphasised that a satisfactory outcome of the legislative process to meet the CFATF requirements is the most important matter to be dealt with to avoid economic disaster for our tourism-driven economy. This needs to be dealt with without any further delay, in the interest of the country. Being blacklisted is simply is not an option.

“Therefore, I submitted a letter to the Council of Ministers dated October 7, requesting the Council to reconsider my resignation tendered on September 23, 2019, and to accept the resignation. This was an attempt to depoliticise the issue of removal from office and other important files. I had hoped to solve the political impasse and to allow Parliament to assume the responsibility to take all necessary decisions, including ensuring to avoid the blacklisting of country St. Maarten.

“I do this because this is not about me, Leona Romeo, this is about St. Maarten’s sustainable future. It should be country before self always.

“I have been reading that we should wake up and smell the coffee. Well, the clock is ticking to the point of no return. I urge all involved to feel the sense of urgency, to step up to the plate, stop the divisive rhetoric and depoliticise urgent dossiers in the interest of the country. I know that the election campaign has started, but on matters for country St. Maarten we cannot afford to lose any more time.

“This decision to step down now was not easy to take, but for me the time has come to take leave of this prestigious office which I have served for roughly 22 months with great pride, in service of you, the people of St. Maarten, during a particularly difficult period of our early history. I know that I have done my utmost to serve St. Maarten well.

“I urge the ‘formateur’ to continue where the Romeo-Marlin Cabinet left off. There is a lot at stake and many projects in the pipeline to be completed which will benefit the people of St. Maarten.”

She said the Council of Ministers in its meeting on Wednesday, October 9, had voted against the motion presented by the coalition of nine and she concurs with the reasons given.

“At the same time, this does not stop the hindering of the political impasse, as the Chairman of Parliament advised the governor that it is especially important to understand the status of both the ‘demissionaire’ minister of justice and the ‘demissionaire’ prime minister in view of the pending handling of legislation to meet CFATF requirements, scheduled now for a public meeting on October 11, 2019.

“The Council of Ministers has always considered the CFATF requirements one of the most important matters for this country. Though I wholeheartedly agree with the reasons given by the Council of Ministers on the motion of no confidence, I stand by what I previously stated and that is the blacklisting of St. Maarten on the financial market is simply not an option.

“Additionally, it goes without saying that I would like to remove myself from the subliminal tone of the letter of the chairman of Parliament to engage in a political dispute between the Parliament of St. Maarten, the Kingdom Council of Ministers and the governor of St. Maarten.

“As parting Prime Minister, I have one wish as we are about to celebrate Constitution Day: Let’s all commit to start the 10th year of our country status by setting divisive political rhetoric aside and do what the country needs to live up to internationally accepted principles of good governance and pursue the United Nations sustainable development goals in the interest of the people of St. Maarten.

“Whatever political colour you belong to or support, these objectives should not be politically controversial. Plan, commit, prepare and execute for the success of St. Maarten. Our people deserve this.”

In a separate press release, De Weever said in his October 10 resignation letter to the Council of Ministers that during a transition, it should not be about political polarisation, but political inclusion in the interest of St. Maarten.

“Today is Constitution Day and as a strong defender of our constitution and our democracy I must do everything humanly possible to avoid any potential conflict or confrontation from escalating with Parliament while protecting the principle of trias politica. As we observe Constitution Day, I would like the council to consider my resignation as soon as possible to avoid the current impasse from intensifying,” De Weever said.

He claimed that Chairperson of Parliament William Marlin “will be using this impasse politically to vindicate himself of what transpired in 2017 and in fact has indirectly instructed the Kingdom Council of Ministers to intervene as they did in 2017.

“I do not want to be used as a political pawn in his, the NA [National Alliance], the USP [United St. Maarten Party], Brownbill and Mercelina vendetta or misconstrued revenge game against the Kingdom Council of Ministers, despite the lack of contention within the Kingdom, and that the interests of St. Maarten are actually being served while the opposite was true post-Hurricane Irma.”

De Weever said in his resignation letter that Parliament, in its capacity as co-legislator, should in this stage until elections focus its strength on the handling and passing of the Penal Code, the Penal Procedure Code and Book 2 of the Civil Code to prevent a public statement of non-adherence to/compliance with the CFATF recommendations.

“Given the sensitivity and risk associated with the potential public statement, I must submit to you my resignation in an attempt to avoid jeopardising our national security. It is often said, ‘Country above self,’ and I will surely put St. Maarten above myself to ensure that the livelihood of our people and our economy are protected,” De Weever said.