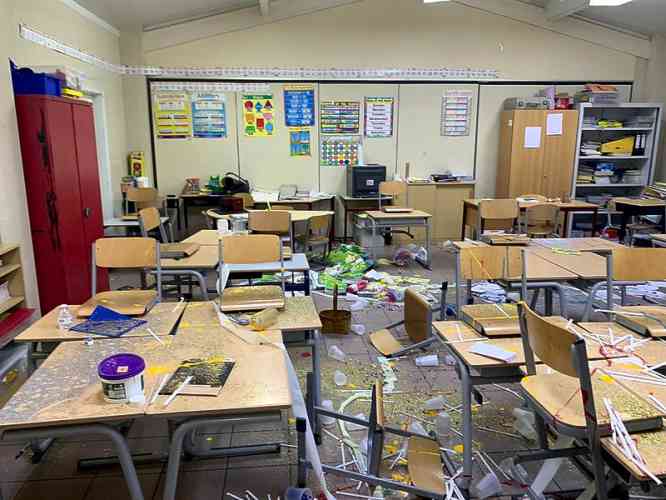 CAY BAY–Two of the pupils involved in the vandalism of a classroom at the Leonald Conner (former Lionel Conner) Primary School in Cay Bay on Monday, were put to clean up their mess on Wednesday in the presence of law enforcement.

A school representative told The Daily Herald that two of the students had been working on cleaning the mess they created in the classroom when it was vandalized on Monday. The classroom had been ransacked, tables and chairs upturned and classroom material strewn all over the room.

In commenting on the matter during the Council of Ministers press briefing on Wednesday, Minister of Education, Culture, Youth and Sports (ECYS) Wycliffe Smith said the school’s celebratory mood was short-lived when staff and pupils found their school vandalised. He said video evidence revealed that the act may have been committed by four youngsters, of which three are possible students and one, an ex-student of the school. The authorities are dealing with the matter as this is a criminal offense, Smith said.

“However, I ask that, as a community, we all be mindful of being our brother’s keeper. Keep watch as a neighbour in the same way that you would appreciate your neighbour being mindful of you. Look out for all children, because they are young and in need of guidance,” the minister stressed.

“We are seeing increased incidents involving our youngsters and a lot of these incidents could be prevented if parents only took some time to ensure that certain core values are instilled in their children. Core values such as respect for others also respect other people’s property. We cannot continue to burden our educators with the task of teaching our children and in essence raising them too. Parents, please play your role. Also remember, it takes a village to raise a child, so let us all work together,” the minister noted.