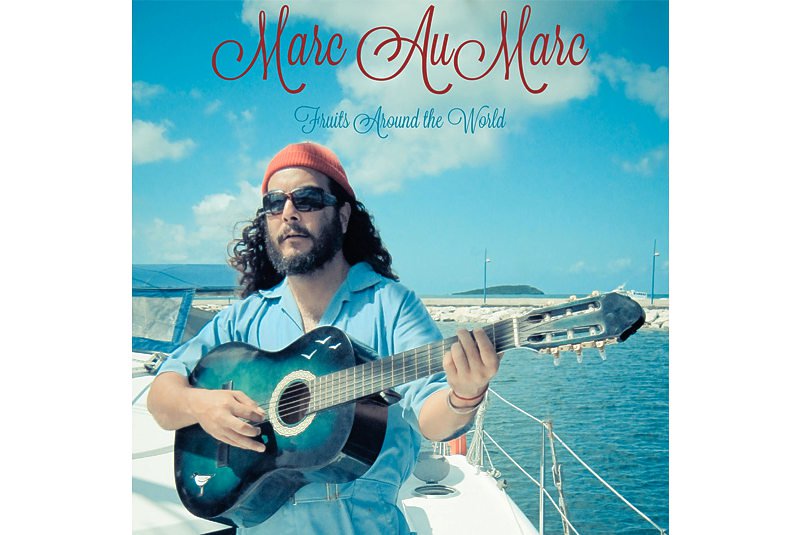 Download Fruits Around the World for free at marcaumarc.com .

MARIGOT–The new album by Marc AuMarc – Fruits Around the World – lives up to its name. From the opening blast of horns to the closing sighs of a church organ, it’s a globetrotting journey of sounds and styles. Over the course of twelve songs, it reshapes the ever-fruitful Les Fruits de Mer theme song in surprising new directions. This latest release is available for free download at

Fruits Around the World was composed and recorded over the last year in a wide variety of extraordinary places, from 30,000 feet above the Atlantic Ocean to the mountains of Cuba. Working with mobile technology, Marc AuMarc was able to create many of the songs on location.

“Drawing inspiration from different cultures and musical traditions keeps the music fresh,” explained Marc AuMarc. “This is the second full-length album based on a theme song that’s less than a minute long, and I think it’s even better than the first one.”

Many of the new tracks are upbeat. Latin rhythms brush up against Scandinavian techno, driving neo-disco and Chinese electro-funk. A few more contemplative takes on the theme balance out the track list.

“The variety of moods on this album is key to the listening experience,” said Les Fruits de Mer President Jenn Yerkes. “We also use different takes on our theme as the soundtrack to most of our documentary filmmaking, so this gives us a range of moods and styles to work with as we produce new films.”

An ever-expanding universe based on a single idea, a simple melody reflecting itself across the globe, and a fun time for all, Fruits Around the World is a lot like Les Fruits de Mer.

http://marcaumarc.com and make it the soundtrack for your next expedition.