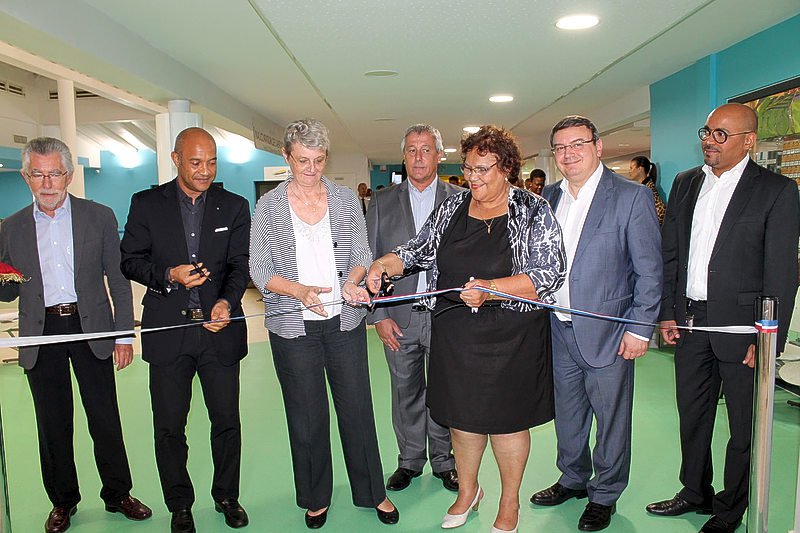 The focal point was, of course, on the brand-new terminal where the speeches were held, which has been completely remodelled, and now welcomes passengers into a more spacious environment that is modernised, well lit, colourful, breezy, and comfortable to complement the new café, boutiques, and the same three airline desks; Air Caraibes, Air Antilles Express and St. Barths Commuter.

Improvements have also been made in enlarging the arrival- and departure halls; free Wi-Fi is available, there are now eight check-in desks for passengers, and a bigger carousel assures speedier delivery of baggage.

Some 2.2 million euros of the 5.6 million came from European funds (FEDER), with the balance paid 50 per cent by SNC-Lavalin and Société d’Exploitation St. Martin Aéroport (SESMA).

Congratulatory remarks were made by President of SNC-Lavalin Youssef Sabeh, President Hanson and Préfète Laubies.

The celebratory occasion came with one regret, however, and that was the still unresolved negotiations over the past four years to obtain the parcel of land from the Laurence family to extend the runway to 1,500 metres.

President Hanson in her address indicated an agreement on a price for the land was now “close at hand.”

Préfète Laubies stressed the matter of the land needs to be concluded quickly, given the intense competition in the region. She credited her predecessor Philippe Chopin for the work he put into the airport project, and promised to send him photos of the new terminal.

Director of SESMA Mongi Djouba will now be handing the reins over to new Director General Daniel Lefebvre, who will take the airport to the next level. He previously managed the airport in Mayotte for five years.

Djouba will be returning to Montreal where he will still work with SNC-Lavalin, but in a different capacity. He accepted a position to be head of an engineering department, a trade that he is very familiar with, when a vacancy arose.

He arrived in St. Martin to take up the position of airport director in 2012, and since then focused his efforts on bringing the project to fruition.

“I do feel sad at leaving, but also pride at the accomplishment,” Djouba told The Daily Herald. “I have no regrets. It wasn’t always easy, but everyone worked together to make it happen.”

Among the guests at the cocktail reception were Director of the Technical Division for Princess Juliana International Airport SXM Mirto H. Breell, and supervisory board of director’s member Michel J. Hodge.

Both men said they were “impressed” by the new terminal and improvements.