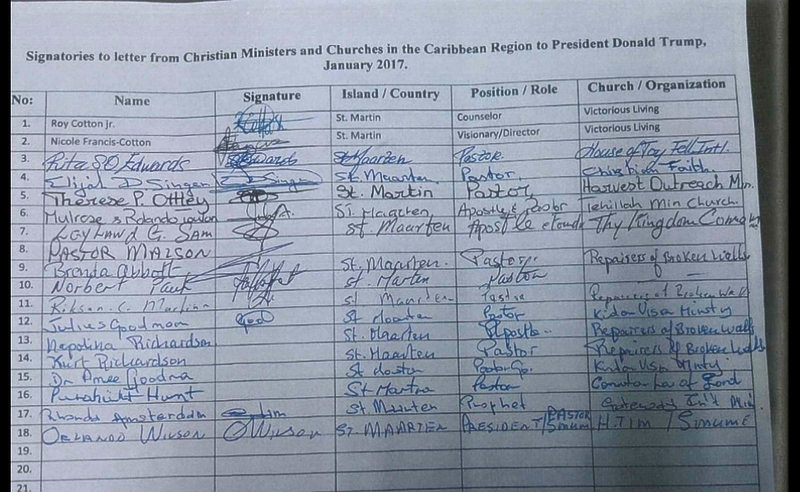 PHILIPSBURG–A letter co-signed by pastors from across the Caribbean, including St. Maarten, to United States President Donald Trump calling on him to “stop spreading the notion of LGBT rights’ in the Caribbean,” has garnered shock from the Lesbian, Gay, Bisexual and Transgendered (LGBT) organisation St. Maarten/St. Martin Alliance For Equality (SAFE).

The letter to Trump, dated January 31, has come to light in recent days and has drawn reactions from the LGBT community to which signing pastors, apostles and ministers belong.

SAFE, in a reaction to the letter, said it wondered at the logic and true intention of this particular call to action, as it was a direct attack on the safety, social standing and long-term security of LGBT persons in the region. Shocking still, added SAFE, was the fact that 19 pastors, apostles and ministers from St. Maarten, “albeit from smaller churches” put their names and signatures to this letter.

“Many members of our LGBT community were shocked and distressed upon learning that pastors from our island had signed this letter. There are so many social ills on our island that these church leaders could have chosen to address, that choosing to focus on this issue seems almost hypocritical on their parts,” said SAFE.

For persons in the community who also understand that same-sex desires and behaviours are not something they choose, it reinforces the idea that many church leaders really do not understand the reality for LGBT persons, said SAFE.

“The tone of the letter in general indicated no understanding and also no willingness to engage with LGBT persons or organisations in order to gain new or further insights. We were deeply dismayed by this,” SAFE President Lysanne Charles-Arrindell stated.

The churches have chosen LGBT rights, including civil and marriage rights, as their focus for their appeal to the US government. SAFE questioned why these churches did not opt to focus on, for example, the estimated two million enslaved men, women and children throughout the Americas – a geographic area that includes St. Maarten and neighbours. “These people, particularly the women and children, usually fall under the purview of the church, as they are to be cherished and protected,” said Charles-Arrindell.

“We have the dubious honour of hosting dozens of the over four million people traded into sexual slavery every year, based on UN statistics, at several establishments. Requesting that President Trump assist with the investigation and persecution of purveyors of the sexual slavery of women and children might be a better use of resources and time,” she said.

Another suggestion from SAFE was for the churches to request US assistance on legislation, from draft to enforcement, to combat the molestation of children within the Caribbean region, “a horror that happens here on St. Maarten/St. Martin at varying degrees, from young children being targeted by relatives, close friends, school and yes, even fellow church-goers, to young girls being preyed upon by older persons.

“The 19 pastors could also request advice on drafting internal policies to ensure that such criminal behaviour does not originate from within their own walls or tents. These 19 pastors, and others of a similar mind-set, might do well to focus their energies on protesting and combatting the prevalence of domestic and sexual violence on the very island they claim to care so deeply about, particularly those instances perpetrated by members of their own congregations,” according to SAFE.

However, while these are all viable suggestions and priority issues for St. Maarten and the region, SAFE said it doubts that these churches and those from other islands that signed this letter are concerned with the continued sexual, physical and emotional abuse of Caribbean people, particularly women.

“They have, after all, requested assistance from a man who has been accused by no less than 24 women of serious sexual misconduct and assault,” said SAFE. The organisation strongly urged them to reconsider aligning themselves with such a person and quoted 1 Corinthians 15:33 as a basis: “Do not be deceived; bad company ruins good morals.”

SAFE said it will continue to be open to dialogue with all persons, organisations and entities who would like to learn more about the reality of lived experiences for LGBT people on the island, including any of the 19 church leaders. “For SAFE, community conversations have always been important. People need to understand that LGBT people are people, period … SAFE will continue to do the work of educating the LGBT community on the island as well as the wider community, because change must come,” Charles-Arrindell said.