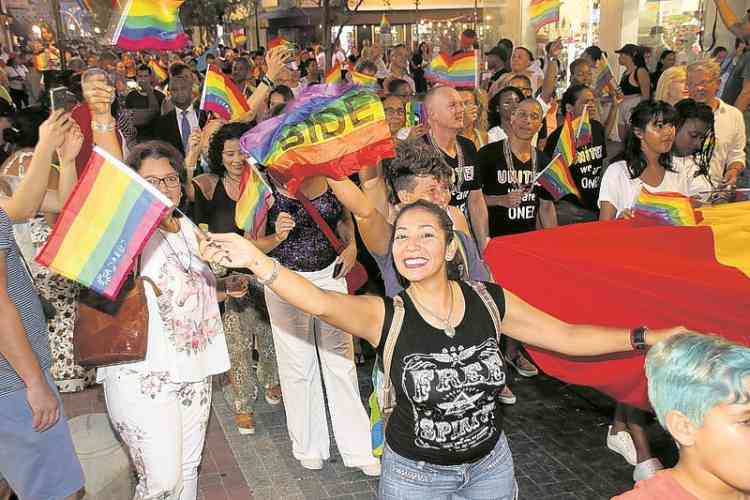 WILLEMSTAD–During the opening of the Curaçao Pride 2018 on Plasa Wilhelmina the organisations FOKO, Curaçao Gay Pro and “Igualdat Kòrsou” handed a draft National Ordinance on the Equality of Marriage to the Member of Parliament (MP) for MAN Giselle McWilliam. This was done on behalf of the entire LGBTQ+ (Lesbian, Gay, Bisexual, Transgender, Queer, plus) community and everyone who stands for equal treatment.

“Currently a large group of the population is excluded from the right to marry,” stated a press release. “This means that some couples who love each other do not see their love recognised by the law, while the same love that other couples have for each other can be crowned with a marriage.

“The distinction that the law makes gives the impression that relationships between couples of the same sex have less value than those of heterosexuals. There is no justification for this discriminatory treatment. Persons who have equal obligations such as paying taxes and contributions to social insurance should also be able to count on the same rights.

“People of the LGBTQ+ community also deserve that their human dignity is fully recognised by law. Their relationships also deserve the confirmation and protection that the law offers to its citizens through marriage.”

The bill aims to eliminate this discriminatory treatment because of the prohibition to marry. When the law proposal is adopted by Parliament two adults, regardless of their gender, will be able to marry each other if they want to.

The marriage described in the law remains a civil marriage. Nothing changes.

It also applies that a couple must first marry before the law, before they can have a religious marriage (such as in the church). That marriage that will be equal to same-sex couples does not mean that they have the right to “marry in church.”

The latter had never been the case for hetero couples either. A religious marriage remains fully a privilege of the religious institutions concerned, in which they decide for themselves how they interpret this.

The organisations realise that there is a part of the population which is not open to marriage equality. They say this is often “based on discriminatory and homophobic views that are the result of centuries-long instigation and indoctrination against the LGBTQ+ community.”

“Although we do everything to increase acceptance and tolerance, we cannot wait until everyone is convinced. This concerns recognition of the same dignity of persons, where every day that this remains uncorrected does injustice to the community.

“Even with the abolition of slavery and segregation or the granting of voting rights to coloured people and women, large parts of the population did not agree. However, we should be glad that people did not wait then to put an end to these unworthy situations.

“If no leadership to correct these injustices had been shown at the time, it could have been a different society today. The moment to unconditionally recognise human dignity is therefore: NOW!

“Martin Luther King Jr. said that when the architects of their republic had written the beautiful words of the constitution and the declaration of independence, they signed a debt note that would make every American heir. This debt letter was a promise that all people would have the inalienable rights to life, freedom and the pursuit of happiness.

“This also applies to the Constitution of Curaçao that guarantees equal treatment. In the same words of Martin Luther King Jr., the community met in the capital of Curaçao to cash in our cheque on equal rights,” concluded the release.