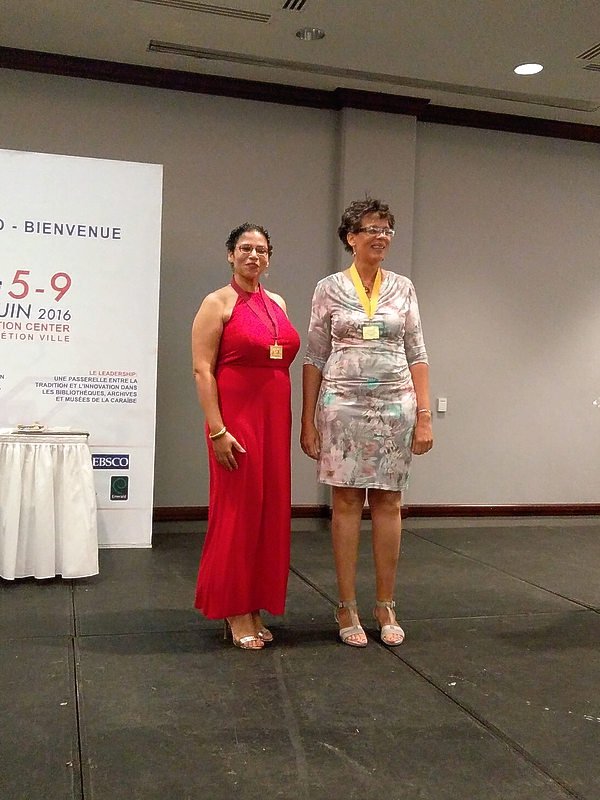 She was recognized for her “excellent leadership in developing avant-garde programmes at Philipsburg Jubilee Library to serve and satisfy the diverse needs of its clientele.”
In her acceptance speech, Alberts stressed the importance of Caribbean cooperation in the field of libraries and information specialists, with special attention to the needs of education at all levels, and the incorporation of modern technology. She thanked several colleagues and predecessors who inspired, coached and collaborated with her through the years, including former library director Blanca Hodge, an active Acuril member in her time.
Association of Caribbean University, Research and Institutional Libraries (ACURIL) President Elizabeth Pierre-Louis commended Alberts’ long-standing reputation as an organizer and innovator in the Caribbean library community.
The Caribbean Information Professional award is the highest annual recognition bestowed by Acuril on a member of the Caribbean community of librarians, archivists and museum professionals. It was the first time this distinction has been granted to a librarian of the Dutch Caribbean.
At the same conference, Alberts made a presentation entitled “Promoting Media literacy in Dutch Caribbean Libraries: The Digikidz Media Lab St. Maarten.” She gave an overview of the history and workings of the library’s Media Lab that came about through a Digikidz project funded by Foresee Foundation. The presentation included several short films made in the Media Lab by primary and secondary school students. .
The plan to turn the Media Lab into a “Maker Lab” under the name “Digiwork” was announced at the conference. A Maker Lab is a space where children and adults can create, invent and learn using modern technology. To this end, a 3D-printer and other materials for scientific exploration will be installed later this year, making the local library the first library in the Caribbean to include this kind of facility.