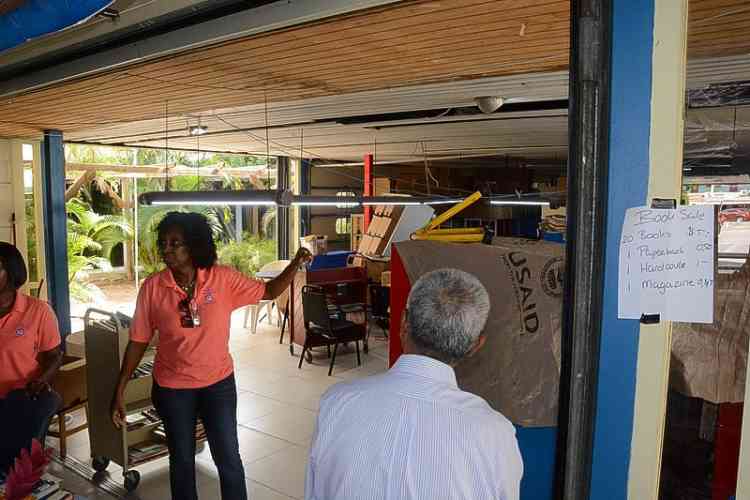 PHILIPSBURG–More than a year ago, Hurricane Irma practically destroyed Philipsburg Jubilee Library (PJL) and at least eighty per cent of its books and other media. Despite this disaster and thanks primarily to the unrelenting hard work, dedication and sacrifices of the library’s staff and others, PJL was able to reopen and continue to offer services to the public.

Those who enter the library’s reception area are welcomed under a ceiling covered with blue tarpaulin. Underneath are a few shelves with children’s books, a small selection of Dutch and English fiction and some magazines. Six computers for study purposes are lining the wall.

The check-out counter, the media lab, the baby room and the library’s sections for fiction and non-fiction look like Irma passed yesterday. The storm blew out a window where the St. Maarten collection was to be found. The information desk has been destroyed altogether.

One does not need an expert to see why the insurance company declared the building total-loss. No repairs have been carried out to date.

The library’s ceiling took heavy blows. When it rains outside it pours inside the library building. Buckets and tubs are strategically scattered across the floor but offer little solace as pools of water are almost everywhere. This caused an unhealthy situation and the Health Inspectorate ordered measures to prevent mildew.

In the area behind the check-out counter the library looks like a warzone. Empty shelves are scattered in what used to be the adult section. The juvenile section is currently in use as storage for saved books in carton boxes.

“Staff members are still packing books every day,” says PJL’s Interim-Director Irmin Hughes during a tour of the building. “When we are ready to move to an alternative location volunteers will be stepping in to help us with packing and moving.”

On November 23, 2017, and December 14, 2017, the Board and Management of PJL met with the former Secretary-General of the Ministry of Education, Culture, Youth and Sport (ECYS), the former acting Head of Culture, representatives of the Ministry of Public Housing, Spatial Planning, Environment and Infrastructure VROMI and the Head of Facility Affairs about relocating the library to an alternative location as soon as possible.

On March 1, 2018, the PJL board wrote a follow-up letter to the former Minister of ECYS. On April 6, the board sent another follow-up letter to ECYS’ Secretary-General. In May, the former minister and her advisors met with PJL and agreed that government would take the decision to allocate insurance payments for PJL towards rental payments for the temporary relocation of the library to the Super Plaza building.

The availability of the building right across the road from the library’s current location was deemed very convenient from a practical and logistical point of view. The idea was to move over before the start of the 2018 hurricane season to prevent further damage to an important part of St. Maarten’s national heritage and also to drastically improve the working conditions of staff.

As also agreed with government, the temporary move would allow for the demolition of the remains of PJL and the construction of a completely new, fully hurricane-proof and modern National Heritage Center (NHC) at the current location of the PJL. The funding for the construction of this Center was included in the initial World Bank Reconstruction Fund’s list.

The Center is estimated to take approximately two to three years to build and will incorporate PJL, St. Maarten Museum and St. Maarten Archaeological Center SIMARC. The latter two accommodations were even more severely damaged than the library during Irma.

The co-location of these three organizations has been 10 years in the making, and shortly after the meeting with the former minister of ECYS, the boards of PJL, SIMARC and St. Maarten National Heritage Foundation signed a Memorandum of Understanding (MoU) based on which a joint task force started preparations for the establishment of the NHC for St. Maarten.

However, since said meeting with ECYS five months ago and after numerous attempts by the library’s board and management to obtain confirmation of government’s decision, the temporary move to the Super Plaza building was ultimately rejected by the Council of Ministers.

“Moreover, the government recently informed the NHC task force that the funding for the NHC was not on the World Bank’s list of projects to be funded and did not indicate which initiatives, if any, were being considered,” the PJI Board said in a statement.

As a result of these developments, PJL, its staff and the national heritage in the remains of the building continuously suffer from deplorable working conditions and the effects of heavy rains and winds.

“It is also abundantly clear that any minor hurricane passing over St. Maarten will most probably destroy what remains of the PJL and the national heritage it houses. Board and management have repeatedly brought this matter to the attention of the government during the past months. Pictures and videos of the extreme water damage and deplorable working conditions inside the PJL building after every rain shower have been provided by library staff.

“However, despite verbal support for St. Maarten’s national heritage by [members of – Ed.] government as recently expressed in the local press, genuine interest in terms of concrete action to protect what is left of it and/or to ensure that it will continue to be easily accessible to future generations, is non-existent,” the library board stated.

“This is very worrisome and highly unfortunate, especially when compared to the commitment to, and actual investments in the preservation, promotion and expression of national heritage in all its forms as displayed by governments of other islands in the Dutch- and English-speaking Caribbean.”

As a result of these developments, the PJI board and the NHC task force have decided to urgently seek alternative solutions to ensure the temporary move of the library, the continuity of its services to the community, the protection of the health and safety of PJL staff and the construction of the NHC as soon as possible.

Besides having requested an urgent meeting with the Minister of ECYS and his advisors, contacts with potential sources of funding in St. Maarten, the Caribbean region and beyond have been initiated and consultations with said institutions about their potential participation in the development of the NHC have commenced.

“The Board of the PJL looks forward to the cooperation of the government and the continued support of the general public and all other supporters and stakeholders in moving forward with the plans for protecting the national heritage of St. Maarten,” the board said in closing.