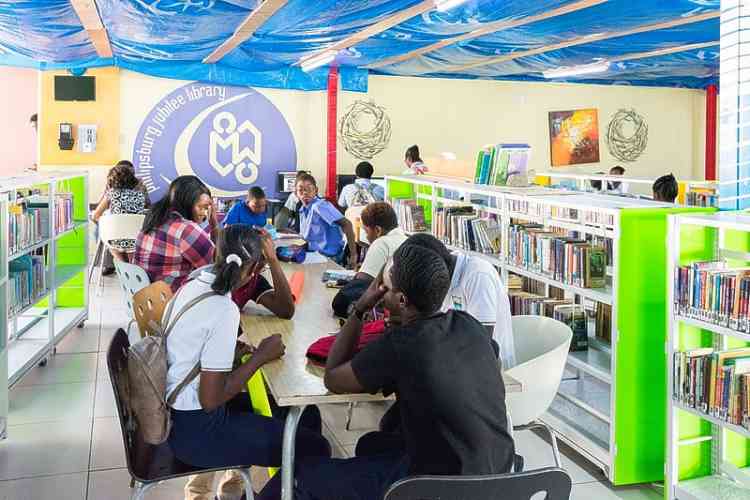 PHILIPSBURG–Like so much of St. Maarten, knowledge centre Philipsburg Jubilee Library is operating out of a severely broken building, and under the ubiquitous blue tarpaulin. The library was not only battered by Hurricanes Irma and Maria in September 2017, it was also ravaged by looters in Irma’s aftermath.

A visitor today to the country’s only public library will be greeted by rows of books stacked closely together in what was the library’s foyer. Every available useable space is crammed with what’s accessible of the library’s collection and computer/Internet services. Students who seek out the quietude of the library to study, now have to get there as early as possible to claim the limited seats, or have to content with sitting under a small white tent.
The current state of the library evokes a sense of profound sadness for library staff, headed by librarian/director Monique Alberts. She, public relations officer Maryland Powell and other staffers are heartbroken and feel helpless about the cancellation of vital library programmes due to the state of the building.

The library’s public book collection has dwindled from 53,400 titles to just 2,000. Book loss is expected to grow as humidity and the prevailing drought conditions take their toll on the damaged building.

Some 3,000 books of the collection have already been condemned due to water damage and resulting mildew after the hurricanes. The bulk of the collection has been boxed up and stored as best as possible by the library staff. However, without proper temperature control, more books may end their lives in the dustbin.

“We boxed up the St. Maarten collection and took it to the historical archives at the Government Building. If not, a lot of unique material would be lost to humidity and water damage, Alberts told The Daily Herald.

That precious collection, numbering some 972 pieces, is secured with other important documents of the country, but it means it is not accessible to the people for whom it is meaningful – students, researchers and historians.

The Caribbean Collection and some of its rare gems are lost. This collection, like the St. Maarten one, is hard to replace or in some cases irreplaceable. The Caribbean region, though home to a rich literary culture, its books – fiction and non-fiction – are published in limited runs or editions.

Theft of knowledge
The library also served as a portal for students who needed access to the Internet and a computer to complete their school work. Looters dealt a severe blow to education when they tore into the library and ran off with some 35 laptop computers that were part of the media lab. Now, students and others have to wait their turn at one of the computers and work as rapidly as possible in their allotted 30-minute timeslot. Computer users sit almost elbow-to-elbow at the screens.

Thirteen desktop computers were completely and 11 partially damaged by water. The 31 notebooks used for the classes in the Medialab were kept in the library office. All 31 were looted when the office was ripped opened by looters. Four tablets used for workshops in the Medialab were also looted from the office. The total value lost in hardware was calculated by IT Company ANTEK as some US $85,000.

Now in use are 11 refurbished computers for staff and public. Those are in addition to the 10 laptops financed by a donation from the Dutch Representation Office in St. Maarten and two laptops from government received from the Netherlands.
“Students are sitting on top of each other. Staff has no office. There is no special archive accessible to library users,” Powell said. “Under the tent is way too hot and we do not have enough tables and chairs.”

The library had 105 sitting/study spaces pre-Irma. Only 32 spaces are available now.
The staff computers were ruined by the collapsing of the building’s roof and the pilfering of looters.

“There is no more ‘Dutch is Fun’ programme. There is no space. We can use the tent, but it is too hot there and there isn’t enough space for everyone,” Powell said. The programme is one that exposes children to the Dutch language, one of the country’s official languages and the primary one used for its legal and justice system.

Trickle into flood
The library faced major challenges, the most pressing its deteriorating building, before Irma slammed into the country. “Our problems and challenges from before have now trickled into the storm damage,” said Powell.

The need for a new, better-built library was acute before September 2017 and talk about the construction of a state-of-the-art knowledge centre to house the library, museum and St. Maarten Archaeological Centre Simarc has been band about for more than a decade.
Experts who have inspected the library building on Vogesstraat, have advised the library and government it does not make sense to repair the existing falling-apart building. It is more of a tear-down job than a repair one, said Alberts.
It is simple for the head librarian: “We need a new building.”
Education Minister Jorien Wuite has announced that the library is on government’s “priority list.” But, it is still a wait-and-see situation.

The library is covered under government’s “umbrella insurance” with NAGICO for which a cheque has been cut only for a partial pay-out on government’s general claim. That pay-out is to be funnelled for school repairs and the library has to wait. “Our insurance premium is withheld every year from our subsidy,” said Alberts. Annually, NAf. 34,900 is withheld from the library’s subsidy. The insured value of the library building is US $1.4 million, and the insured value of the inventory and equipment is US $664,000.

The library’s subsidy even without withholding the insurance premium is insufficient for its operations. The library makes up for that shortfall with donations and fundraisings where possible. The library has continued its reading therapy classes. This programme was and continues to be much needed following Irma. This and other stride under the tough circumstances have caught the attention of Central Bank of Curaçao and St. Maarten and has resulted in a recent financial donation.

Staying open to the public is a leap of faith for the library staff. But, the nine-strong team is committed to their cause of serving readers, students and researchers.
The Inspectorate of Health had called on the library to shut its door to the public after its mould assessment. This recommendation did not sit well with staff. They were determined to stay open. So, they cleaned and conserved. Their efforts were supplemented by those of volunteers of St. Maarten Doet two weeks ago.

Mosquitoes are also a plague that library staff battle daily. Rain water had accumulated in parts of the broken building. This is one aspect that drought has positively impacted by drying up some of the water “reservoirs.”

“We didn’t want to close. Where will students go? Where will our members go? And if we close, we will also be jobless,” said Alberts and Powell.