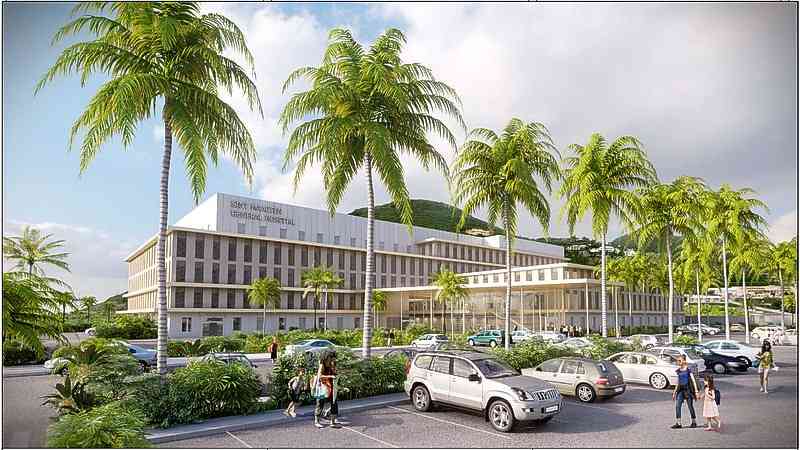 PHILIPSBURG–Health Minister Emil Lee said on Wednesday that efforts are being made to have the loan documents for the construction of the new hospital signed this Friday.

He said the lenders and financiers of the project had met in Curaçao last week and authorities have a “commitment” for NAf. 135 million for the construction of the main hospital building.

A revised concept drawing for the new hospital has also been received. Some modifications had been made to the structure for it to be resistant to hurricanes stronger than category 5.

“The lawyers for the different parties are busy working on the final loan documentation,” Lee told reporters at the Council of Ministers press briefing on Wednesday. He said the document is 100 pages, “so there is a lot of work. … The intention is to have the formal signing on Friday. Everyone is burning the midnight oil to make sure that this happens.”
Revised drawings for the new hospital will have to be submitted to the Ministry of Public Housing, Spatial Planning, Environment and Infrastructure VROMI for the necessary building permits, and construction agreements will have to be amended, “so there is still quite some work that needs to be done and this will be the case as we go through the entire project.”

A meeting on the hospital project was held with World Bank representatives this week. Lee said one of the wings in the original drawings for the new hospital had to be omitted and the funds from that wing would be used to reinforce and upgrade the structure of the main hospital building. Government has requested that the Netherlands and World Bank “replace” the omitted wing. A business plan and the procurement procedure were submitted to the two parties.

Alongside the physical construction of a new hospital building, authorities are also looking at quality standards for the new facility. Partners, including financiers, recognise that for the hospital to be “successful,” efforts need to be made to ensure that quality standards are met. Lee reiterated that St. Maarten Medical Center (SMMC) as well as hospitals in Curaçao and Aruba have agreed to work together to attain Joint Commission International (JCI) accreditation, which would facilitate the possibility to share resources and protocols.

According to Lee, SMMC is currently bursting at its seams. Staff and storage of materials are in containers outside the SMMC building and therapy is being done in the SMMC hallways. He said reports also indicate that the current SMMC building would not be able to withstand a category 2 hurricane at this stage. “The new hospital is coming,” he said.
Additionally, authorities are working on National Health Insurance (NHI), which has been heavily criticised by stakeholders. Lee said the legislation is currently at the Council of Advice and Social Economic Council SER, with which there have been ongoing talks. A report from the Council of Advice is expected in the next few weeks.