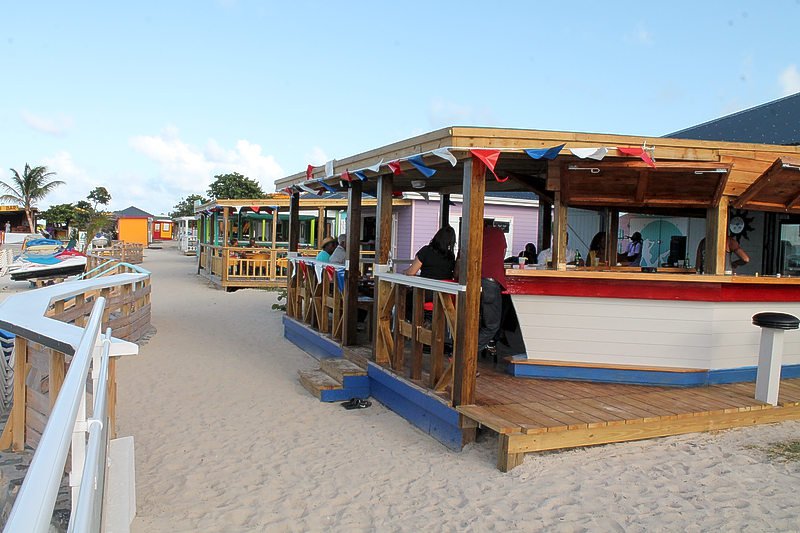 ~ Gillian Jermin: “We’re making the best of it.” ~
MARIGOT–The remaining three local proprietors of the new Orient Beach “carbets” who have spent the best part of the year fighting the Collectivité to complete what they claimed was an unfinished project, have signed their contracts, agreed to pay the rent, and are in the process of opening for business.

With the best part of the tourist season over, the proprietors are shrugging off the extra costs they have had to pay to complete their units and are focusing on the season ahead.
“It doesn’t pay to keep on complaining,” admitted Gillian Jermin, who with her husband Maurice, have been the most vocal in their demands during the course of the protests. “We’re trying to make the best of it now.”
The pair was in an upbeat mood at an opening party at their Pirate Hideout Beach Bar and Grill on Saturday to thank all those who supported them in the “struggle.” Gillian said she was hoping to open for business the next day, Sunday, but added the restaurant might not open until this week.
“We are still waiting for the water connection, so we are having to use buckets,” she added. “Apart from that we are ready to go. Business has died down but we are relying on the locals now. We take each day at a time but we are happy with the location.”
As agreed, the Collectivité covered the terraces of each restaurant with a wooden roof, however, other expenses such as adding a bar and other fixtures were down to the tenants. Germin said she had spent an extra US $8,000.
The rent of 2,200 euros is due July 1. Both Jermin and Leandre Carti (Chez Leandre) pointed out that although the Collectivité agreed to consider a payment plan or make an adjustment if the tenants had difficulty in paying the rent this was not mentioned in the contracts.
“We don’t see how we can pay the rent when there’s no business now, so we still have to sit down and talk,” said Leandre. “I’m going to send in the receipts of my expenses. If we don’t get paid back at least they (Collectivité) should give us a break on the rent.”