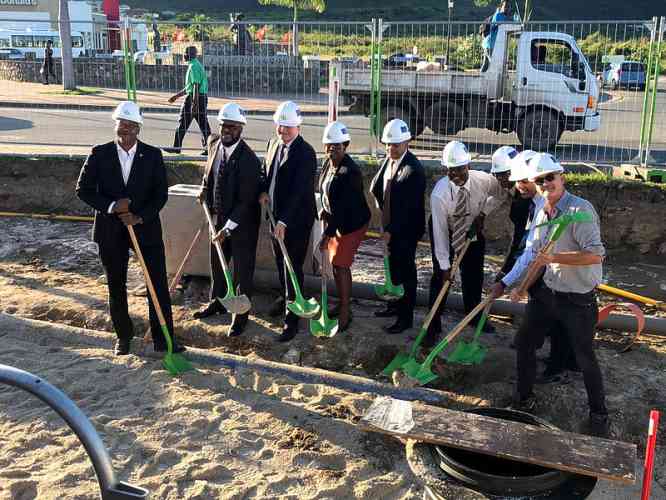 The some 18-month-long project is funded via the 10th European Development Fund (EDF) with a budget of some 6.1 million euros and 1.3 million euros is co-financed by government.

The project comprises the expansion of the sewer network including home connections and connection to the main sewer line, upgrading of the side roads and improvement of the overall drainage system in Dutch Quarter, improvement of public street lighting and related works for the entire district and the construction of pedestrian sidewalks. The first phase seeks to connect more than 500 homes to the main sewer line.

During this construction, excavated areas will be closed off to traffic and pedestrians. A number of traffic signs will be placed at key locations to inform the public of the works and any detour. During traffic peak hours, extra personnel will be put in place to direct the traffic at day or night.

Justice Minister Cornelius de Weever signed off on October 19 all traffic waiver forms to pave the way for the extensive works.

Environment and Infrastructure Minister Miklos Giterson said the lack of sufficient sewage infrastructure on St. Maarten has become a critical issue, which government has attempted to address in its 2018-2022 governing programme.

“The construction of a proper sewage network, investing in our infrastructure and improving safety and facilities resources are all fulfilled in this project.  The fact that we have found a way to involve the young unemployed men and heavy equipment owners of the community is also something to be applauded,” Giterson said in the Council of Ministers’ Press Briefing.

The people of Dutch Quarter will be heavily involved in the rebuilding and betterment of their community. “This is a stipulation that I intend to implement more when hiring contractors for large projects such as these; that we go into the neighbourhoods and look for talent there first,” the minister said.

Prime Minister Leona Romeo-Marlin also welcomed the project, saying it was a major step for the country that will bring significant improvement to Dutch Quarter.

The supervision contract was signed in February 2016 and had a commencement date of December 2016. However, that start time was not realised due to unforeseen circumstances.