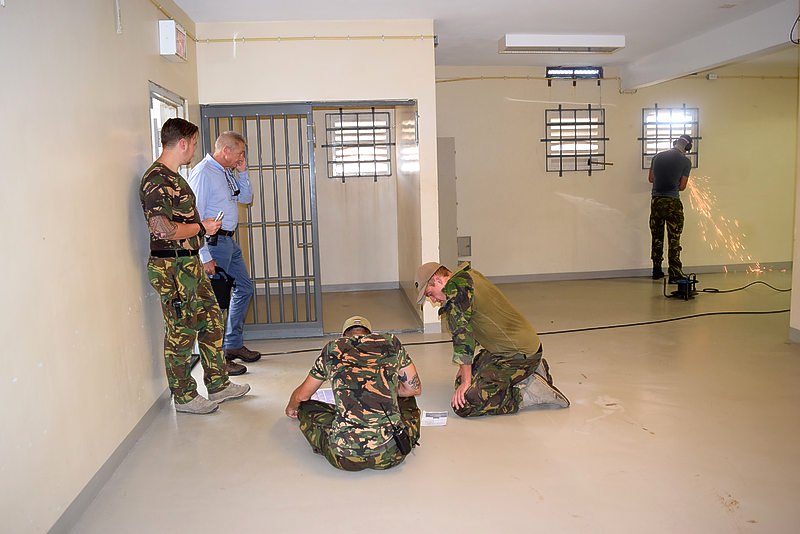 SIMPSON BAY–Looters who have not shown remorse for their criminal behaviour, as well as their damage to the economy and destination image, by taking advantage of the grace period offered by the Prosecutor’s Office will land themselves in “looters jail.”

The former detention centre for undocumented persons adjoining the Simpson Bay police station will become “looters jail.” The Royal Dutch Army Engineers are hard at work transforming and improving security of the building. They are expected to complete their task in less than a week.
Retired Lieutenant Colonel Jan Rooijakkers, who is part of the Dutch Civil Mission, told The Daily Herald Justice Minister Rafael Boasman had requested assistance with the preparation of the “looters jail.”
The engineers got to work more than a week ago after the request was received and have been at it since, said Rooijakkers.
The jail will accommodate some 60 persons in a dormitory-style holding. Beds will be bolted to the floor. Most of the beds were already available from the former detention centre. Other items to outfit the jail will be ordered or purchased locally.
Rooijakkers, who has served as a Police Chief in the Caribbean Netherlands, said, “Looters should be in jail. It was very wrong to take advantage of the storm. They damaged the image of the island.”
The Prosecutor’s Office announced recently that persons who broke into businesses after the passing of Hurricane Irma and stole items can apologise for their actions and return the stolen items at that office in Philipsburg until November 1.
The grace period applies only to looters and offenders who voluntarily return the stolen goods at the main Prosecutor’s Office. This can be done every working day from 10:00am to 12:00pm. One has to identify him- or herself.
“The suspects must come clean and tell where the goods in question came from or how they came into their possession,” the Prosecutor said in a statement to the media.
If the goods do not exceed an acceptable amount, no search will be done at their homes and they will not be detained. “Of course, a punishment will still follow. He or she will be eligible for community service in those cases where the amount of goods is acceptable by the prosecutor,” said the Office.
After November 1, the police and Prosecutor’s Office will continue to investigate suspects in full force. The Prosecutor’s Office will then not take into account anymore whether the suspect regrets his/her actions.