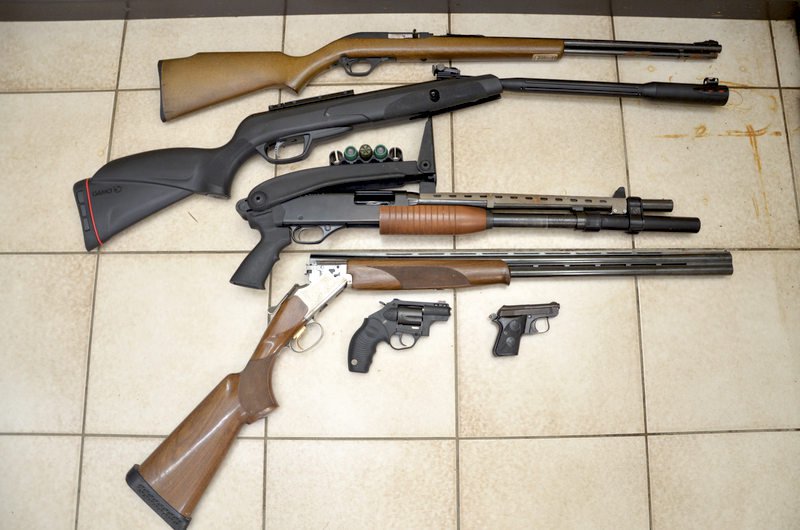 PHILIPSBURG–The Police Force of St. Maarten continues its investigations of mass looting of many businesses on the island in the aftermath of Hurricane Irma. Four suspects were arrested on Monday during three house searches executed at different locations.

The first search took place at a home in Ebenezer B.B.L.L. was arrested for looting. Numerous electronic items were found and confiscated during the search of his home.
The second search was conducted at a home on L.B. Scot Road where R.C.B.Ch. was arrested for several criminal offences such as theft and illegal gun and drugs possession. A brand-new car, several high-powered firearms, a very large amount of ammunition and an amount of illegal drugs were found and confiscated during the search.
The third search was done at a home in Sucker Garden where two suspects, both identified with initials O.F., were arrested for looting. A considerable amount of name-brand clothing, electronics and alcohol were found and confiscated during the search.
All suspects were arrested on the spot and taken to the Philipsburg police headquarters where they remain in custody for questioning and further investigation.
The Police Force is working with the assistance of Police Forces of Aruba, Curaçao, the Netherlands, the Royal Marechaussees and the Volunteer Corps of Curaçao VKC that are presently on the island along with the Volunteer Corps of St. Maarten VKS and the Customs Department.
“The amounts of arrests in the looting investigations continue to grow rapidly and this is due to the amount of reliable information that continues to pour in to the Police Force daily. House searches and raids were then executed from the information received which resulted in the arrest of many suspects,” according to police spokesman Chief Inspector Ricardo Henson.
The police continue this investigation and are asking anyone in the community who may have photographs or video footage of persons looting in the aftermath of Hurricane Irma to share these photos or videos via personal message to the police Facebook page.
The police have received many messages with information connected to this investigation. These messages will all be reviewed and investigated. The police encourage the community to continue sending messages that will definitely be instrumental in bringing those persons responsible to justice.