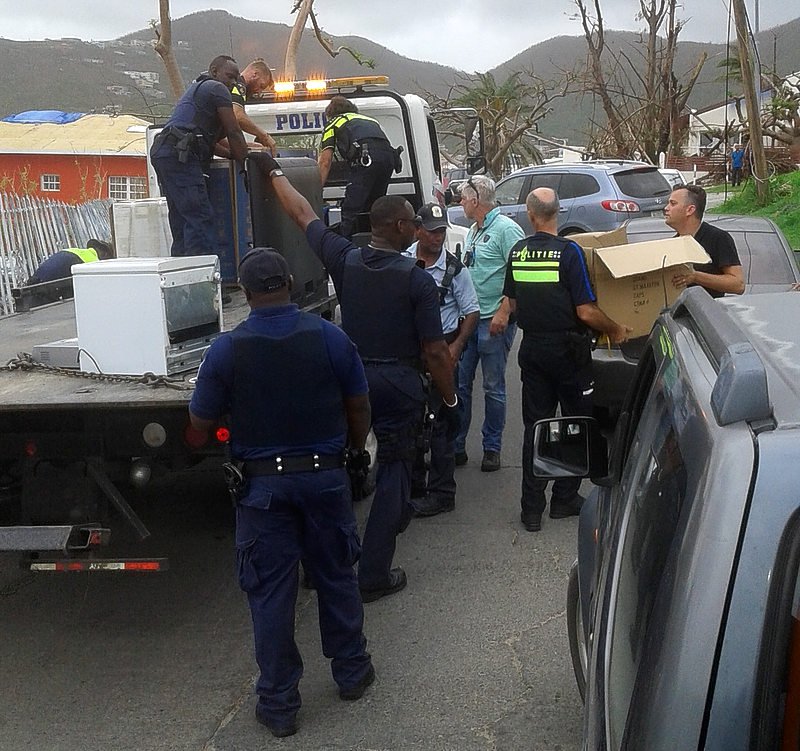 PHILIPSBURG–Police are on the lookout for persons believed to have looted after the passing of Hurricane Irma on September 6. Some two weeks later, a special task force has been put in place to investigate possible looters and bring them to justice.

The question asked by many persons in the community is: Are police officers breaking in doors without having the proper documentation to do so? Prosecutor’s Office spokesman Norman Serphos assured The Daily Herald on Wednesday that everything is being done by the book.
“When the police collect the information and start their investigation, it is just the first phase. Police extensively investigate and bring their findings to the Prosecutor in charge. It is not that we are getting this information from residents and going to homes to search for stolen goods,” stated Serphos.
What happens when a neighbour or someone with an axe to grind decides to give bad information to police and accuse someone without having any proper proof? The Daily Herald understands that there were a couple of cases in which officers acted on bad information and had to apologise for invading people’s homes.
The process includes having a statement (proces verbaal) before the investigation findings are turned over to the prosecutor who will decide whether the search is warranted. If residents refuse to let police officers enter and search their homes, the prosecutor can present the possible suspect with the order of search.
Police spokesman Chief Inspector Ricardo Henson said officers continue to act within the laws of the land and no searches are done based on just getting information from residents. The unit thoroughly investigates the case before a statement is made and presented to the Prosecutor’s Office for further decision-making.
Looted goods that are confiscated are stored at the police headquarters in Philipsburg. According to police, stolen goods are confiscated until the owners come forward and collect their goods.
However, this newspaper understands that two weeks ago, two washing machines were donated to a foundation that needed them. The foundation called live on Laser 101 at the time and thanked police for donating the washing machines. The foundation representative said police had apprehended looters with the machines. When asked about it, Henson said he did not recall police doing that.
Serphos said the prosecutor is not aware of such an action by police and directed the question to the Police Force.
Business owners are asked to contact the police and file their reports on their missing goods.
Meanwhile, more arrests will follow, according to Henson. Residents are urged to pay keen attention to police instructions when officers arrive at their doorsteps.