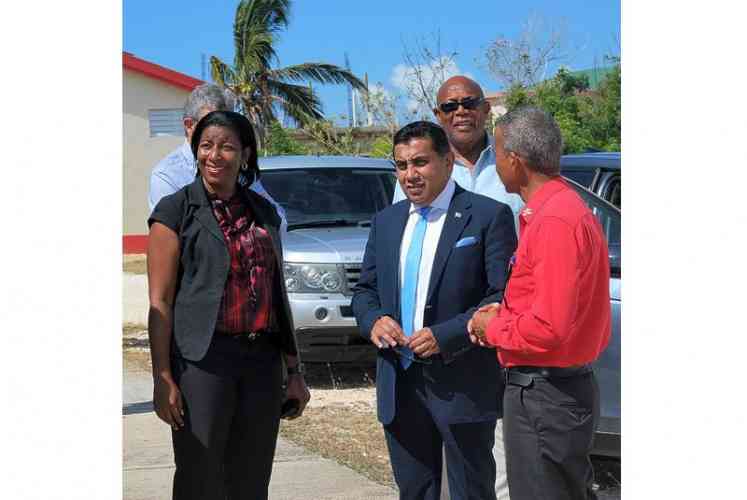 ANGUILLA–Lord Ahmad of Wimbledon, Minister of state at the Foreign and Commonwealth Office with responsibility for the Overseas Territories, accompanied by Governor Tim Foy and Chief Minister Victor Banks made a comprehensive tour in Anguilla to see first-hand the damage caused by Hurricane Irma. He was able to also see the re-building and to hear of the plans for future projects made possible by the 60 million pound grant from the UK government.

First on his agenda was a stop at the Morris Vanterpool Primary School in the East End, which was so severely damaged that the pupils had to relocate to another nearby facility remodelled to serve as a temporary school. Met by Minister of Home Affairs Cora Richardson-Hodge and the school’s principal Michael Skellekie, he toured the destroyed school as well as the temporary new facility. He said, “I am amazed how quickly the temporary facilities were up and running as the primary focus of Anguilla’s administration was ensuring that the children’s education should not suffer. That is something that should be acknowledged and celebrated. The important thing now is to look at the re-construction using the first phase of funding already allocated to build back the facilities better and more resilient. While I see the devastation, I also see the success story. Hats off to the administration for getting the education facilities up and running as soon as possible.”

Lord Ahmad then travelled to visit the Princess Alexandra Hospital which suffered major storm damage, losing its roof, and suffering the resulting loss of equipment and bed space during the storm. Reconstruction of the hospital is one of the six approved projects funded in the first instalment of the 60 million pound grant. He was met by Permanent Secretary of Health, Foster Rogers; acting Chief Executive Officer (CEO) Meredith Gumbs and Health Planner Maeza Dem-Adams, who ensured he saw every hospital department and office, including a tour of the pharmacy, the wards, the dialysis section, as well as the kitchen where he took time to review the menu for the day. Also included was a tour of a new maternity ward under construction, as well as the new, hardened storage area for the electrical generators. He also received a briefing on the acquisition of new equipment such as the computed tomography (CT) scanner and plans to expand dental services for the island.

At the end of the hospital tour Lord Ahmad said, “Immediately following the hurricane, monetary assistance of seven million pounds from Britain was given to Anguilla with some of that going to the repair of the hospital. An additional four million pounds from the first instalment of the 60 million pounds is earmarked for the hospital and we are seeing that financing being utilised now. It’s not just putting back what was already there, but enhancing the facilities and ensuring technological advancements can be accommodated. The new maternity wing is an example of this support which will increase capacity from four to eight patients. Britain has made the financing of the hospital as well as the total health care offering for the island a priority.”

The tour continued to the Albena Lake Comprehensive School, Campus A, also destroyed during the storm, and resulting in all students being housed at the Campus B location. Architectural plans are underway to re-build a more modern high school in a new location. The morning tour ended at one of Anguilla’s five-star resorts, Belmond Cap Juluca, currently closed until November 2018 for major renovations. 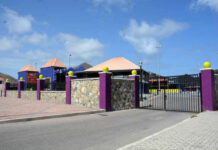