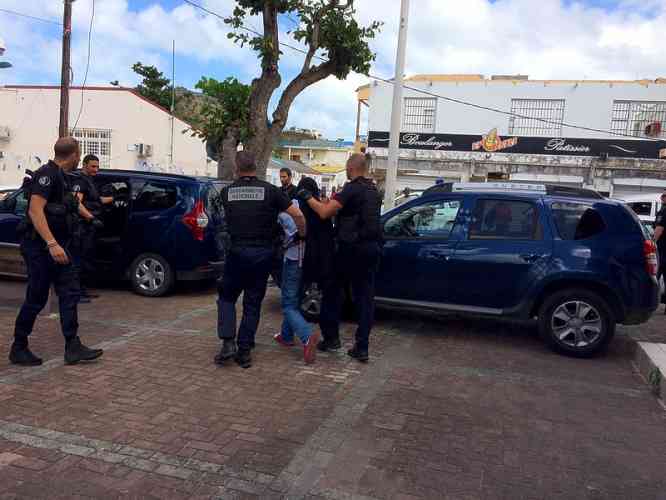 MARIGOT–The three Loterie Farm robbery suspects appeared in court Wednesday morning in Marigot to hear the charges read out to them by presiding judge Catherine Leuly-Joncart; however, sentencing will be deferred to April 24, in Basse Terre, Guadeloupe, after the defendants pleaded for a delay to prepare their case.

The three defendants stood before the judge each with court-appointed translators and lawyers, while Gendarmes stood guard.
E.M. and M.M. were both born in St. Maarten from Cole Bay and Dawn Beach respectively, while L.G. was born in Santo Domingo but was residing in Grand Case. The latter had been convicted before on June 13, 2017, for a similar crime, the court heard.
The victims from Loterie Farm sat on the left side of the court while a few relatives of the defendants sat on the right side.
All three defendants are accused of theft with violence for stealing US $21,940 and 9,080 euros from Loterie Farm, in addition to hand bags and IPhones taken from two other employees. Charges considered whether the acts of each perpetrator required sick leave for the victims – in French Interruption Total de Travail (ITT). In William BJ Welch’s case –he was physically assaulted – that was five days and for another employee, one day.
M.M. is facing additional charges of carrying a 9mm Ruger pistol (category B) weapon that was used to strike Welch on the back of the head, and for driving the getaway car at high speed putting other road users in danger, failing to obey a command to stop by law enforcement official, and failing to obey the rules of the road.
Lawyers for the defendants highlighted the difficult circumstances they endured following Hurricane Irma – having no money, no jobs and their houses destroyed. This testimony was met with derision by the victims, one of whom left the courtroom in disgust. Two of the defendants attempted to apologise to the victims for the suffering they had caused.
Prosecutor Yves Paillard requested the defendants remain in pre-trial detention given the seriousness of the case, and not let them be released on probation until the trial citing a risk they would not turn up for the summons, which he said would also put undue anxiety onto the victims who have already shown courage to attend the court hearing. He also highlighted the good judicial cooperation between St. Martin and St. Maarten.
The judge adjourned for a few minutes to consider the prosecutor’s request before returning to state the defendants would immediately be placed in detention in Guadeloupe. With their heads covered in a blanket the defendants exited the main entrance, each held by two Gendarmes and placed into waiting cars to be driven straight to the airport. A large crowd had gathered outside the courthouse to watch the suspects come out.
Asked for his reaction to the hearing, BJ Welch said: “I’m satisfied in one sense that they are being put away, but a bit deceived. I was hoping for a sentencing today.”