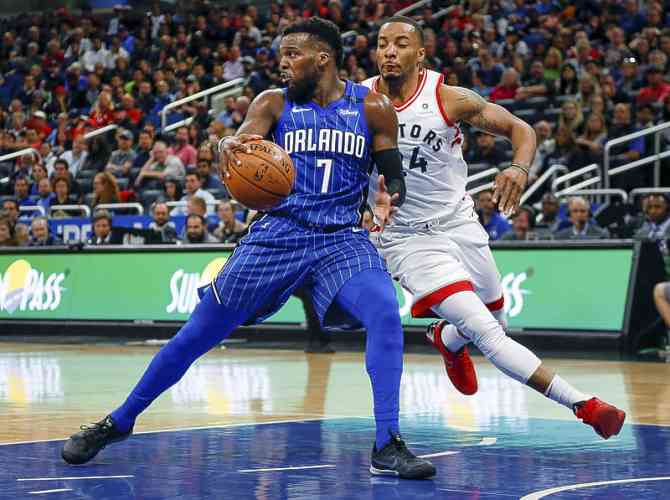 FLORIDA–Kyle Lowry scored 25 points, and the Toronto Raptors rallied from behind in the fourth quarter to knock off the host Orlando Magic 93-86 Tuesday at Amway Center.

The Raptors trailed by eight entering the fourth quarter but surged past the Magic with a 16-2 run, fueled by Lowry. The Toronto point guard assisted on an alley-oop dunk by Lucas Nogueira and followed with a 3-pointer that gave the Raptors the lead.
Serge Ibaka scored 13 points, and Norman Powell and Delon Wright each added 10 points off the bench for the Raptors, who bounced back after having their 11-game winning streak snapped by the Oklahoma City Thunder on Sunday.
Shelvin Mack came off the bench to score 17 points, and Aaron Gordon had 16 points for Orlando, which has dropped seven of eight.
The Magic led for the majority of the first half and were up 10 after a dunk from Gordon with 2:42 left in the second quarter. However, the Raptors closed out the half with an 11-0 run to take a 52-51 lead into intermission. Lowry hit two 3-pointers and a layup during the spurt.
Orlando opened the third quarter with a run of its own. D.J. Augustin had seven points during the surge that put the Magic in front 67-58.
Orlando led 76-68 heading into the fourth quarter.
The Raptors play at Cleveland on Wednesday. The Raptors visit the Boston Celtics on March 31 and then host them on April 4, in the last meeting of the regular season between the conference’s top two teams.
After a surprising 8-4 start to the season, the Magic have long been playing for the future. They are mathematically eliminated from the playoffs and have been giving more playing time to lesser-known reserves in recent weeks.
Orlando continues its seven-game homestand Thursday when the Philadelphia 76ers visit.
Retired star Tracy McGrady, who spent time with Toronto and Orlando during his 15-year NBA career, was inducted into the Magic’s Hall of Fame at halftime of Tuesday’s game.