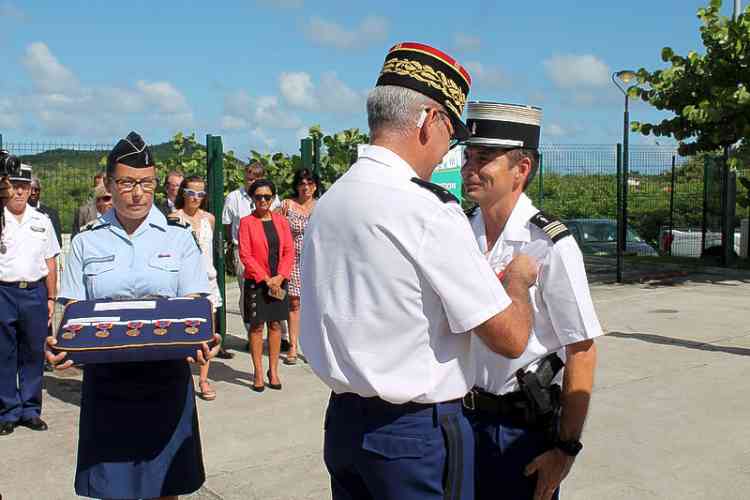 MARIGOT–Commandant of the Gendarmerie of St. Martin and St. Barths, Lieutenant Colonel Sébastien Manzoni, was presented with the Legion of Honour medal bestowed on him by General Jean-Marc Descoux during a ceremony in the La Savane headquarters on Friday.

The distinction of Chevalier de la Légion d’Honneur adds to the Gendarmerie Medal he was awarded earlier this year.

The Legion of Honour is the highest French order of merit for military and civil merits, established in 1802 by Napoleon Bonaparte and retained by all the divergent governments and regimes later holding power in France, up to the present.

Lt. Colonel Manzoni was awarded the distinction for services rendered and in particular for his handling of security in the aftermath of Hurricane Irma in 2017.

In addition, several other Gendarmes received medals for diligent investigations or citations for bravery during missions. The ceremony was attended by Préfète Sylvie Feucher, Chief Prosecutor Samuel Finielz, President Daniel Gibbs and other elected officials from the Territorial Council.