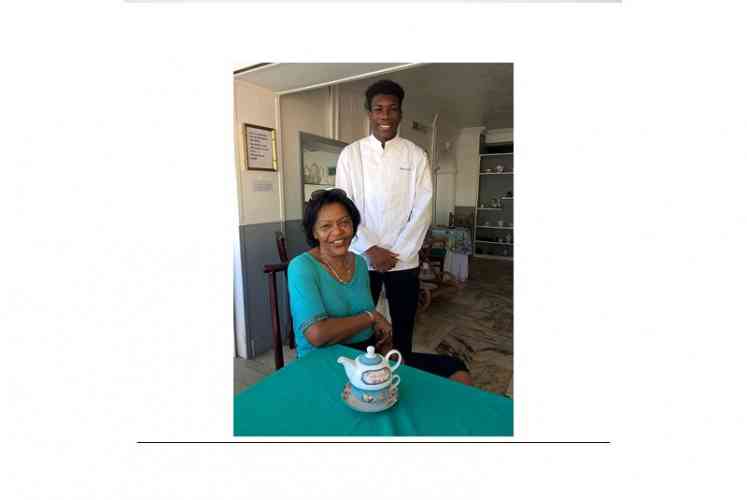 MARIGOT–Hurricane Irma disrupted many people’s lives and not just by the destruction. Hurricanes have a way of deciding one’s destiny for better or for worse, testing one’s resolve, one’s resourcefulness. Irma forced many people to take stock of their lives. Some were reluctantly forced to abandon once-well-established businesses to try something completely new, no matter how alien it seemed.

Lucy Davis is one such person who took the plunge to start a new business. A prominent figure in the 1980s and ’90s, she opened the first bridal store in St. Maarten in 1987, followed by Destination Weddings in 1997. The business surrounding those two words “I do” was lucrative for Davis, but she had also been a victim of bad luck, finding her bridal store business disrupted by Hurricane Luis in 1995 and the wedding business by Irma in September 2017.

“Back then I offered to plan weddings on the French side first, but they didn’t go for it, so the Dutch side picked it up,” she remembers. “The Dutch-side government streamlined their procedures in line with Anguilla, St. Lucia and other countries, which enabled me to do it. Before that I was planning weddings in Anguilla and in less than six months the demand was so high. I remember it would cost 120 EC [dollars – Ed.] to get married and in no time at all it went up to 250 EC.

“I used to handle all the paperwork. All the couple had to do was come to the island and say, ‘I do.’ Whatever they wanted – photographer, flowers, music, video, catering – I would put it all together for them. Most of the time the wedding was on the beach. A government official would come to officiate along with the witnesses. Every wedding was different. It was always interesting.”

But then Irma decided to visit on September 6, 2017. “I cancelled all the wedding bookings I had and that was that,” she lamented. Davis comes from a family of eight sisters and one of her sisters, Claudette, was into cooking and cookbooks, having previously run a small restaurant at Paradise View on the French side.

“Before Irma, Claudette told me she was thinking of going back into the restaurant business, and one day we had lunch at this Vietnamese restaurant in Marina Royale, Marigot. When they came with the bill, I asked the owner if he needed a chef. He said ‘no’ because he was closing the business to go back to France with his daughter and selling the chairs and tables for 300 euros. My head was still in the wedding business and I thought the tables and chairs would be very useful.

“But that night I thought about it more and called my sister and tried to convince her to take the restaurant. Neither of us really had the money. We discussed it for about two weeks. Finally, I went back to David and told him to sell the chairs and tables as Claudette was not interested any more. But later I was in the Family Book Store to buy a card and I saw this beautiful teapot with an inscription on it that read ‘Trust in God.’ I immediately had an epiphany. My eye fell on the teapot and I knew I had to have this restaurant.”

Davis subsequently met with the restaurant owner and the deal was struck on August 28, 2017. The timing could not have been worse. A week later Irma devastated the island, along with Marina Royale and the restaurants.
“I’m not ashamed to say that I cried every day. Oh my God, what have I done? My daughter wanted me to go back to Holland, but I said, ‘No I’m staying.’ Little by little we repaired everything. It was not easy, but I got through it. At that time, I had no clue what the restaurant business was about and had no chef. I had to learn.”

Today, seven months after Irma, the former 35-seat Vietnamese restaurant in Marina Royale is called “The Big Sip Restaurant and Tea Lounge.” And by Lucy’s side is a dynamic young chef, Henri Jedlin (20) who is a graduate of the Lycée’s catering college earning his Bac Pro in 2015. He went on to gain valuable experience at fine restaurants such as Tropicana, Ti Bouchon, Bikini, and in hotels, even while he was studying.

“We’ve taken up the challenge together, he and I,” says Lucy. “We are both committed. I’m new to the French side and all the paperwork back and forth has been a new experience. But we are making it work.”

She describes the menu as a fusion of American, Caribbean and French cuisine with emphasis on creativity. And making this restaurant somewhat different are the various tea sets sitting on shelves.

“My focus is on serving teas. My vision is a ‘Salon de Thé.’ But I haven’t even touched that market yet. Next month with one of my sisters I plan to have the first high tea and workshop. Little finger sandwiches, some sweet things and a selection of teas. My idea is to have some small groups by appointment. Rotary Club meets here every Thursday and other women groups.”

Davis is excited about her new venture and is optimistic for the future. While it is understandably not busy yet, one thing is for sure: the state of Marina Royale cannot get any worse than it is now. It can only come up, soon to return to its former glory. Samagest, the marina’s management company, confirmed at a meeting with marina businesses it is about to embark on repairs.

Big Sip is open for lunch Monday to Saturday from 11:30am to 3:00pm and for dinner from 6:30pm to 10:00pm. It is closed on Sunday night and Monday night, except for special events.