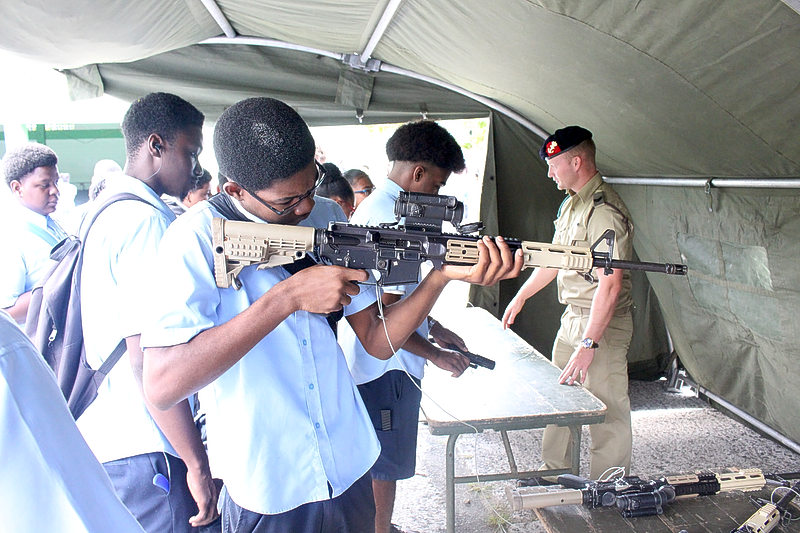 MARIGOT–The Lycée at Cité Scolaire Robert Weinum has been rated the top public school in an independent study of public and private schools conducted by the Le Parisienne newspaper.

The Lycée was top of the table out of 25 Lycées achieving a success rate of 95 per cent and an added value score of 28 points, the latter score more than all other schools in France. The study was based on the Baccalaureate results of June 2016.

The brand new establishment in La Savane, which includes a Collège, opened in January 2016. The Lycée caters to 970 students with some 60 teachers.

Frantz Gumbs pointed out to The Daily Herald that major national newspapers, not only Le Parisienne, use statistics from the Education Ministry to classify the Lycées, but classify them according to the newspaper’s criteria and not criteria from Education Nationale.

“What Le Parisienne did was compare results achieved to results expected,” Gumbs explained. “They calculated expected results by looking at the quality of the population. If you have a private school that only recruits from a well-to-do and intellectual background, or let’s say from higher social standings you would expect to get good results.

“If you take poor social standards and other disadvantages, but obtain high results it means your institution has brought added value to the public that you are catering to. In our case in St. Martin, with over 30 per cent unemployment among the youth, that alone tells you there are weaknesses in society.”

He noted the success rate at Baccalaureate level for Cité Scolaire should have been 84 per cent, but ended up being 95 per cent.

“If your success rate is above what was expected considering the quality of the public then you have added value.”

Gumbs said he, teachers and pupils were naturally “happy and proud” to hear the news. He said he has received requests for interviews from several media outlets, both national and local. It has also created quite a buzz on social media with many likes and shares.

“We have a responsibility now to maintain this standard,” he acknowledged. “Getting there is one, but staying there is even harder. That’s the challenge we face now.”

He attributed the success to the stark contrast between studying conditions at the noisy, overcrowded Lycée in Concordia, to the modern, quiet environment of Cité Scolaire.

“Cité Scolaire undoubtedly has better working conditions for everyone. It is not in town, there are no streets and traffic noise, and less aggressiveness. There is access to modern technology, modern teaching methods, and this is all conducive to better learning.

“All the staff, from management down to teachers, administrative staff, cleaners, are attentive and listening to the pupils. There is this closeness and accessibility. No pupil has a question unanswered. They are supported in whatever difficulties they have. All of the staff here have accepted that they have a role as educators.”

Gumbs also disclosed that another newspaper L’Express, using different criteria, rated the Cité Scolaire Lycée 101 out of 2,270 Lycées in France and third out of 20 Lycées for the Academy of Guadeloupe.