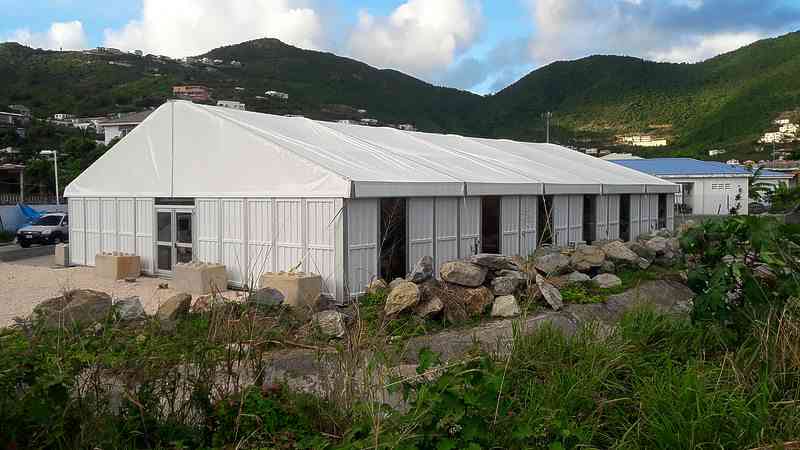 EBENEZER–Methodist Agogic Centre – Comprehensive Secondary Education (MAC-CSE) has been unable to use the pavilion (tent) the school received to hold classes following Hurricane Irma, because the air conditioning units in the tent are giving issues that utilities company GEBE apparently can help the school resolve.

The pavilion becomes extremely hot during the day and cannot be used without the airco units to cool it down.

In an invited comment, GEBE Chief Executive Officer (CEO) Kenrick Chittick acknowledged that MAC-CSE had contacted GEBE about the matter, but said before the upgrade can be conducted an inspection has to be carried out and an inspection card has to be submitted to GEBE.

“Yes, there was a request for assistance … to accommodate the school with the ACs, in the meantime we are in final phase to get a contractor to do trench work to have a suitable cable to carry the load for the school. This should be completed within days this week,” he said.

A concerned parent familiar with the matter told The Daily Herald that MAC-CSE has not yet started to use the pavilion, as electrical upgrades are needed from GEBE.
“We are now in January and the official handing over of the pavilion was done months ago. In order for the pavilion to be conducive to teaching and learning, the air condition units must be turned on,” the concerned parent said, noting that this cannot be done because GEBE needs to make some upgrades to make this possible.

This newspaper understands that the situation has resulted in frustration of teachers, students and parents, who are irked at the prolonged delay and non-caring attitude from authorities in addressing this matter.

The pavilion is part of the relief supplies St. Maarten received from the Netherlands following Hurricane Irma. They are expected to be handed back over to authorities on June 1, and to date, MAC-CSE has been unable to hold classes in the pavilion.

GEBE’s attention
Chittick said the energy the MAC-CSE air conditioning units consume is too much load for the existing fuses currently installed. He said also that the size of GEBE’s cable is too small to carry the demand of the additional units.

“We had a similar situation at the CBA [Charlotte Brookson Academy for the Performance Arts – Ed.] where the request for a certain load was too small and when installation was complete the air conditioning units were also tripping the fuses/breakers. This was rectified already,” he said.

In CBA’s case the units tripped the breakers each time they were switched on as the circuit could not carry them. CBA was told to purchase fans to solve this problem, but the school had to secure funds for this. After its story was made public, Jacobs stepped in and the Education Ministry, GEBE and VROMI worked to rectify the issues and eventually resolved that matter.

The concerned MAC-CSE parent expressed hope that something will be done sooner rather than later to resolve the airco issues with the pavilion so it can be used for the purpose for which it was intended and not be left empty.

Each of the pavilions St. Maarten received has six classrooms. Each pavilion can safely house about 90 persons at one time.
MAC-CSE was contacted for comment on the matter, but up to press time no response had been received.

March 4, 2021
4
At Saba’s airport THE HAGUE--The US $3 million mortgage loan to Windward Islands Airways (Winair) is not a disguised form of government aid, according to...

March 4, 2021
4
At Saba’s airport THE HAGUE--The US $3 million mortgage loan to Windward Islands Airways (Winair) is not a disguised form of government aid, according to...