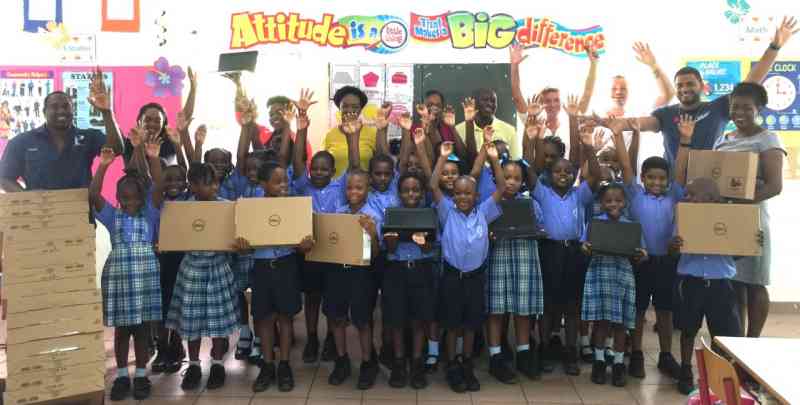 PHILIPSBURG–The 48 children of group four at the Methodist Agogic Centre (MAC) St. John’s Campus primary school found out last week that the boxes brought into their classroom were laptop computers and some additional hardware items.

After Hurricane Irma, the city of Den Bosch in the Netherlands, in collaboration with Dutch Caribbean grassroots organisation Nos Baranka, offered assistance to St. Maarten. One of the main criteria was that the donation needed to meet global sustainable development goals.

During a post-Irma St. Maarten event in the Netherlands, Ludwina van der Meijden, representing Nos Baranka, met with RebuildSXM Foundation, which followed up on this request and contacted Foresee Foundation in St. Maarten.

Together with Nos Baranka, Foresee Foundation wrote a plan proposing a DigiKidz project for MAC, which had sustained quite some damage during the hurricane and which was eager to bring integrated technology into its schools.

A presentation was made by management and IT staff and presented to the committee in Holland. With the collaboration of the Dutch company Skool which had supplied all three current DigiKidz schools in St. Maarten with network equipment and student devices between 2014 and 2016, 43 laptops, a switch and wireless access points were ordered.

The delivery of the laptops to the school was sponsored by shipping agent ProfPac. CaribWork, partner in all Foresee DigiKidz and DigiTeenz projects, will install a small two-classroom network for pupils and staff to effectively use the technology. This additional part of the project will be sponsored by Foresee Foundation through a private local St. Maarten donation.

The tech-savvy Group 4 teachers and IT staff, together with the pupils, will start exploring the use of the laptops and will integrate them into the Foundation-Based Education curriculum in the upcoming months.

The next step in this project will be to set up a pen-pal partnership with a primary school in Den Bosch, where pupils on either side of the Atlantic will become pen-pal friends through e-mail and social media.

MAC school Executive Director Coram-Hughes expressed her sincere thanks to Den Bosch and all other sponsors.