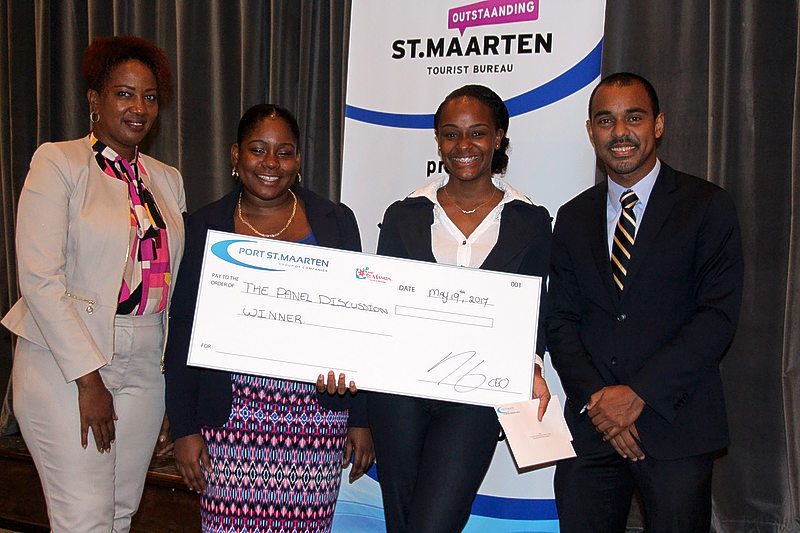 Meyers will represent St. Maarten at the Caribbean Tourism Organisation (CTO) Youth Tourism Congress in Grenada in October, when she will have to compete against 8-10 students from other countries/islands for the regional title of Junior Minister of Tourism. She will also represent the country at local and regional functions, together with the Tourist Bureau.

Meyers presented a tourist attraction to the panel of judges and audience members. The Pelican Museum would house restaurants, gift shops, local performances, St. Maarten Pioneers projected as holograms and St. Maarten’s top-class art. With an impressive 3D PowerPoint presentation, Meyers said the attraction would be one of a kind and would attract locals and tourists to visit the museum located in Mullet Bay. The project gave team MAC 159 points over the other schools.

Minister of Education Silveria Jacobs was present at the discussion and encouraged students to delve into the tourism product.

Tourist Bureau Head Rolando Brison was excited about the competition, having represented his school 16 years ago. He represented St. Maarten at CTO, and then the Caribbean as the first chairman of the CTO Youth Congress.

“I’m a first-hand witness to the power of youth tourism awareness initiatives like these in preparing future leaders of our tourism industry. This is a project very dear to my heart and I’m very pleased with our product development team at STB for doing such a great job putting this together,” Brison said during the opening of the discussion on Friday.