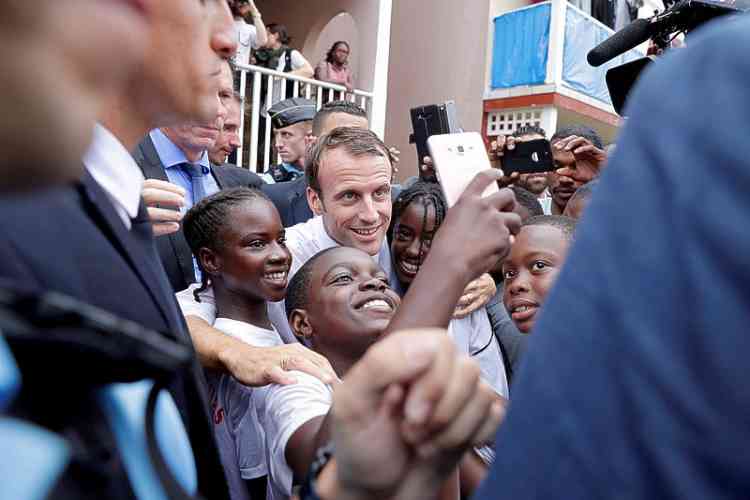 MARIGOT–President of the French Republic Emmanuel Macron has suggested St. Martin needs “a new tourism model” after quoting a figure that said the French side is benefitting from only five per cent of tourism activity compared to its Dutch-side neighbour. It should be a model based on “bio-diversity, the value of heritage, quality of welcome and quality of infrastructure,” he said.

His remark referred to reinforcing the attractiveness of tourism, suggesting that a new strategy is needed. He agreed that there should be emphasis on highlighting heritage in the centre of Marigot, repairing Creole houses, developing the market and work of artisans.
Developing and sustaining tourism was just one of several points he brought up in an hour-long press conference held in Plantation Hotel in Orient Bay on Sunday morning that brought his short visit to St. Martin to a close.

If there were any hopes of more money forthcoming for reconstruction, there was no mention of that. Instead there was a long justification of the 500 million euros spent by the State in the aftermath of Irma, a familiar refrain.

He talked of the military interventions, reinforcement of the Gendarmerie, the deployment of 3,000 civil servants, the volunteers, the help brought by the aid agencies and so on, for what was an “unprecedented” situation.

However, there was a sense of frustration from the President that reconstruction is not proceeding as fast as on the Dutch side and he called for an acceleration of work and for those responsible to accept their responsibilities.

He was particularly annoyed about incomplete repair work on social housing in French Quarter, calling it “inacceptable.” He put the blame on Semsamar, which he said had everything to gain financially from rents, etcetera. He said this work must be completed by December 31, 2018, or the Préfecture will impose penalties on the company.

Continuing on the theme of the aid provided by the State, he said the partial unemployment scheme (chomage partiel) will be continued into 2019. The cost of this scheme has already risen to 75 million euros in 2018. The moratorium on social charges for businesses will also be extended to June 30, 2019. Some 638 businesses were also helped at a cost of 2.7 million euros.

Addressing the situation with the schools and the recent demonstrations by unions and parents over the slow reconstruction progress, he said each establishment will have a steering committee that will meet each week to discuss progress. The committee will be composed of parents, teachers, administrators from national education, and the relevant construction companies.

A technical agent from national education will also be recruited to monitor construction progress. Fifteen million euros was provided by the State for the repair of schools. There was agreement that a Vice-Rectorat is needed in St. Martin.

On the environment, he noted there are some 170 boat wrecks still to be removed. The objective is to salvage 32 between now and December 2018 and the rest in 2019. More assistance will be given by the State to accelerate this work.

With regard to the new flood risk map to be brought out in 2019, he said the so-called “Fonds Barnier” expropriation funds of 10 million euros will be activated to move people away from high risk zones into safer areas. It will be done gradually and on a voluntary basis. He said these danger zones must be respected. He said any new construction must have a second floor to allow for evacuation from the ground floor. A new control commission will enforce new urbanism rules.

On the social benefit Revenu Solidarité Active (RSA) which costs the Collectivité 17 million euros per year, Macron said this must be studied to come up with a new system for better control of abuse. The most likely option is to implement the Cohesia debit card which will ensure money is spent in St. Martin. The Cohesia card was successfully used to help the most vulnerable citizens in the aftermath of Irma; 4,000 persons were helped, receiving 200 euros each.

There was praise for the Gendarmerie and Civil Security for their work in the aftermath of Irma. He insisted St. Martin is “safe” and noted the reduction in delinquency. Armed robberies have gone down also, the number divided by two between 2017 and 2018. But he said controls by the Collectivité and the State will be reinforced on all businesses to stamp out corruption, fraud, and money-laundering.

During a brief question and answer session, a journalist asked Macron whether he regretted meeting a young offender recently released from prison. A photo opportunity with the offender and another young man went viral on social media, as the photo showed one of the young men making a rude gesture to the camera, seemingly pointing at Macron. The President played down the meeting without mentioning the gesture, saying that the young offender was entitled to a second chance.

There was no mention in the press conference of a damming television documentary made by M6 called “St. Martin – A paradise with two faces” that exposed the stark contrast between the two sides of the island. President Daniel Gibbs had demanded an apology and corrections from M6 but the station stood by its reporting.

The President’s 24-hour visit in St. Martin began Saturday afternoon with arrival at Grand Case Airport. The accompanying national press corps had meanwhile arrived separately at Princess Juliana Airport. The President and his delegation were previously in Martinique and Guadeloupe.

This was his second post-Irma visit, largely designed to assess progress made with reconstruction one year on. He made a short declaration to the press before visiting French Quarter and the newly inaugurated Maison de Services au Publiques (MSAP), where he also met members of the district council. The Compagnons Batisseurs gave a presentation on reconstruction in the district for inhabitants who had suffered the worst from hurricane damage.

Then it was on to the new Préfecture building in Concordia where he unveiled a plaque before attending a reception to honour all the services mobilised in the aftermath of Hurricane Irma.

The press conference at Plantation Hotel in Orient Bay concluded his visit to St. Martin. Macron final departed for St. Barths in the afternoon where he was due to meet Territorial Council President Bruni Magras, Senator Michel Magras and Députée Claire Javois. A visit to the crisis operational centre was also on the agenda before the return to Paris.